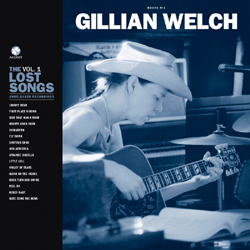 Lockdown seems to have spurred Gillian Welch into action. Hardly a prolific artist, this latest disc comes hot on the heels of her covers album, ‘All The Good Times’, and a further two volumes of so-called “lost songs” are promised soon. ‘All The Good Times’ was a lockdown collection of fresh recordings with her long time partner David Rawlings, but ‘The Lost Songs’ series comprise a selection drawn from a cache of home demos and reel-to-reel recordings laid down by Welch and Rawlings in 2002. Apparently, this burst of activity was in order to release Welch from a publishing contract and the songs were then filed away. The three volumes will feature 48 new songs, a veritable treasure trove for fans.

For a set of home recordings, not intended for release, the quality (in both sound and talent) is quite astounding. It’s just the pair of them singing and playing their guitars and banjo and they do so quite brilliantly. Had this collection come out in its unadorned state at the time it would have simply taken its place in the canon, the only thing missing would have been a proper album title. As it is, we should be glad that these “lost songs” have been found.

‘Johnny Dear’ opens the album and immediately we are drawn into a hardscrabble American hinterland, cold and dreary, as Welch sings this epistolary song of separated lovers. It’s chilling to listen to but perfectly executed and the pair return to frontier themes on ‘Shotgun Song’ and the cowboy blues of ‘Apalachicola’. Delving into more arcane Americana tropes there’s the banjo fed ‘Little Luli’ and the genuinely spooky ‘Honey Baby’ complete with its mention of a gallows tree. ‘Back Turn And Swing’ is another song fuelled by past times but on this occasion, it is a joyful capture of back porch frivolities while ‘First Place Ribbon’ has a bare boned Bobbie Gentry like southern tilt to it.

Rawlings’ playing on songs such as the plaintive ‘Fly Down’ and the glowering ‘Blind On The Inside’ is never less than exemplary but he excels on the closing number, ‘Here Come The News’ as his sinewy notes add an extra dimension to the song. Altogether, the 16 songs gathered here are all prime Welch and they bode well for the following volumes.

Only available in download (MP3, WAV, or FLAC), the album is available on Ms. Welch’s website as well as the usual digital platforms.

Gillian Welch's "lost" recordings knock everyone else for six.