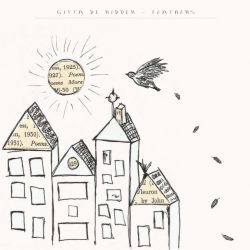 Soft and soothing  vocals, simple yet effective melody sums up”Wanderer”, the first track of Anglo Dutch singer songwriter Gitta de Ridder’s  debut album. “Feathers” seems a very apt title – feathers float, they are soft and gentle as they caress and touch you and so this album’s offerings do exactly that. These are stories of life, love and families. The main elements of the music are vocals and guitar recorded in the main at her home studio, but with the addition of cellos and children’s toy instruments.

She has a folksy pop orientation but her unique vocals make her both a little hypnotic and poetic, leaving you with a warm, honest glow. A well developed vocal belies her debut to the album scene although she has sung and played for most of her life. A foray into playing with various bands resulted in her eventually deciding to go it alone as a “girl with guitar”. This album was successfully crowd funded by her ever growing band of supporters. This is well worth a listen if you are looking for some astute honest lyrics delivered with tenderness.

Submit and float and turn and enjoy.