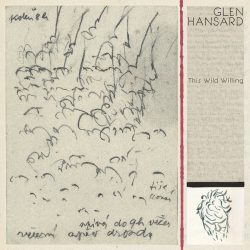 ‘This Wild Willing‘ is the 4th solo record by Academy Award and Grammy award-winning songwriter, Glen Hansard. Having originally cut his teeth with Irish band The Frames, Hansard released his first solo album in 2006 and has also written music for the film ‘Once.’ Hansard says about the writing process for this album, “This collection of songs is mainly made up of those that came through while improvising and following the melodic lines and threads.” ‘This Wild Willing’ was written in Paris, recorded at French Black Box studios and produced by David Odlum.

Lead track ‘I’ll Be You, Be Me’ starts out with drum machine-esque drums and a tight bass guitar, before Hansard’s mysterious vocals enter almost as a restrained whisper, breaking his lyrical phrases up and leaving space allowing for tension to be built. Strings enter in the bridge section adding a soft ambient atmosphere before building up to an intense end to the song. Hansard’s vocal in ‘Don’t Settle’ is almost reminiscent of Lou Reed. Monotone, although still very soulful, you can also feel the emotion dripping out of him. The soft female backing vocal is welcome in the chorus, adding a new timbre for the listener to enjoy. The song builds to a huge climax, where Hansard shifts from Lou Reed to Eddie Vedder, beautiful horn lines and driving drums and bass bring this track to a climactic close.

‘Race To the Bottom’ brings a new musical aesthetic to the fold. Hansard’s Bob Dylan influences definitely become apparent in this track. The horn lines take on an eastern flavour at times. The experimental outlook of the album is definitely explored thoroughly throughout the structure of this track.

‘This Wild Willing’ mainly features tracks that push the 6-minute mark, ‘Mary’ being the exception at only 3 and a half minutes! Hansard’s vocal here takes a backseat, allowing room for the instruments to take the floor. As you listen to this track you start to realise that the length is perfect for the nature of the song. Crisp string lines take the lead above a steady acoustic guitar rhythm.

The soothingly spacious ‘Weight of the World’ adds a new aspect to the album that you feel really needed to be explored. The beautifully melodic drone that is created by the plethora of instrumental choices used by Hansard makes this track what it is. Words are used sparingly and sung softly. ‘Leave a Light..’ brings the album to a close, Hansard’s vocal leaking emotion above a soft cloud of string instruments. It is everything there is to love about the whole album rolled up and inserted into one song, bringing the rollercoaster ride that is ‘This Wild Willing’ to a melancholic and peaceful end.

Glen Hansard wrote this album whilst exploring the possibilities of improvisation, and wrote the base of the songs on a basic idea that he worked on and developed into the wonderful arrangements that we hear on this album. The progressive nature of the songs are what make it such a fantastic listening experience; you really are taken for a ride in every single song, through the experimentation of different orchestrations, the big crescendos and intense climaxes and the beautifully melancholic corners that Hansard turns to throughout the whole of ‘This Wild Willing.’

An album full of spacious beauty and intense climaxes