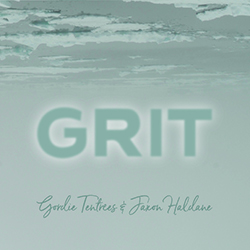 It’s probably unfair to start listening to an album from the third song on the track-listing but, c’mon, the song is called ‘Craft Beards and Man Buns.’ It had to be done. It would be easy to write this off as a bit of a comedy skit. But it’s far from it; what shines through are some great guitar and banjo playing along with some well-observed and tight put downs. The delivery is just the right side of judgy and you can picture Gordie gently shaking his head as he sings: “Craft beards, man buns, just leave it alone my son / You’ll regret that, when you look back, like a tattoo on a roll of fat”.

Both Gordie Tentrees and Jaxon Haldane have multiple records behind them. ‘Grit’ is their joint debut album. It contains a mix of previously released tracks, covers and some new collaborations. It was recorded primarily as a live album over the course of a number of shows and as such is representative of the 600 concerts in 11 countries they’ve performed together since 2014. As an album, it doesn’t feel “live,” the audience aren’t intrusive and the sound is clear and sharp. What comes across is the realness of it all, you can feel the grit.

The opening track ‘Armand’ is the first song Tentrees and Haldane wrote together. It’s a bluesy, jaunty dedication to a Dutch protest singer written while on the road in the Netherlands. ‘29 Loads of Freight’ transports us to a dusty railroad where it’s easy to visualise the duo playing their cigar box guitars and harmonicas – idling away the time until the train comes in. A catchy chorus and guitar playing that reflects the sound of the railway hold the song together.

Tentrees doesn’t have the strongest vocal range but the roughness works for these songs. ‘Junior’ is a case in point. It’s a story about a musician’s life. Battling to balance home and life on the road, the song celebrates the highs, but boy, when it delivers the lows you know about it. There’s something about Tentrees’ gruff and raspy voice as he sings: “Buried a son, the earth fell flat, when you lose a child, nothing hurts like that” that makes you choke up.

‘Lost’ is Tentrees’ tongue-in-cheek song about his marriage. He begins almost speaking the words “She married me, she wasn’t late,” it soon builds into a beautiful and honest acoustic track. Tentrees and Haldane harmonise and the lap steel brings a delicacy to the delivery of it all.

Haldane takes lead vocal on the cover of Willie P Bennett’s ‘Willie’s Diamond Joe’. It’s a more mournful take on the original but it works perfectly with the forlorn sound of the harmonica as he laments “She’ll curse you and she’ll haunt you And she’ll do it with a smile”.

The other cover on the album ‘I Don’t Have A Gun’ by Will Kimbrough and Tommy Womack is a real triumph. Uplifting, raw and raucous with a tinge of Seasick Steve, snarls at listeners: “drunk as I am, it’s a good thing I don’t have a gun”.

The album showcases what a great bond Tentrees and Haldane have formed through their live shows. To deliver such a strong and polished set of tracks from live recordings too, is testament to how skilled they are as musicians (they play over 10 different instruments between them). However, it’s the powerful songwriting and gritty (no pun intended, well maybe…) delivery that makes ‘Grit’ stand out.

All songs contain GRIT. The essential ingredient to overcoming adversity.