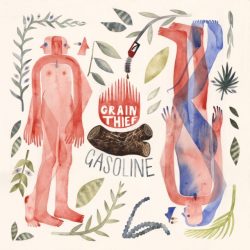 It is a pretty great time for bluegrass right now, as a number of younger bands who have been clearly schooled in the traditions of the music, but who have also been raised with interests that far exceed those roots are exploding across the bluegrass universe with their inventive take on what Bill Monroe first conjured up so many years ago.  Falling squarely in the vein of thoughtful, forward-thinking string-bands is Grain Thief.

Upon first listen, it is easy and lazy to peg Grain Thief as just another young bluegrass band with their classic acoustic lineup of fiddle, Dobro, mandolin, guitar, and upright bass.  But they quickly blow those quaint notions of who they are out of the water with their adventurous take on traditional roots and bluegrass.  With ‘Gasoline’, their second full-length album, they have firmly established themselves in the vanguard of forward-thinking string-bands like the Punch Brothers, Infamous Stringdusters, and Sierra Hull.  Bluegrass has long suffered from a segment of the fan base and bands who are reluctant to see the music evolve, instead preferring to stay true to what they know.  Grain Thief is not one of those bands.  While they prove they can clearly pick in the traditional sense as evidenced by ‘Pedal Down’, a high-octane road-song from ‘Gasoline’, they at the same time show remarkable range and inventiveness.  ‘Gasoline’ highlights Grain Thief’s willingness to explore just how far bluegrass music can be stretched.  They seamlessly move from the cajun-inspired ‘Manche Mi Camisa’ to the hard-driving-Steeldrivers-esque ‘Nightmare’ to the title-track that is just begging to be played live to show off the band’s dynamic amplitude and energy.

‘Gasoline’ is a definitive statement of arrival and purpose for a band that is just beginning to flex their impressive musical muscles.  It is a statement that can be heard from the tops of the mountains all the way down to the hollers below and echoing through cities across the country.  It is a modern-take on a well-worn style that proves there is still much to be discovered in bluegrass and string-band music.