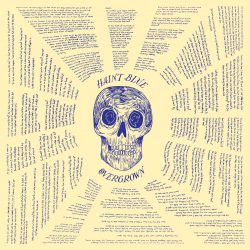 Haint Blue are a popular seven-piece folk pop/rock outfit from Baltimore, Maryland with a loyal fan base and a four track eponymously titled EP under their belts released back in 2015.  Judging from posted videos their live shows are uplifting and energetic featuring strong lead male vocals, layered harmonies, duelling fiddles, banjos and mandolin and whoops and hollering a plenty. Their debut album ‘Overgrown’ is due out February 15th according to the promo pack and features eleven tracks all of which demonstrate solid confident songwriting, strong musical performances and creative arrangements staying well within the bounds of their chosen genre and yet still sounding fresh and very entertaining.

For the most part the lyrical themes concern songwriter and frontman Mike Cohn’s ten year struggle with faith, family and serious addiction.  He expresses his introspections thoughtfully and poetically and, maybe surprisingly given the tone of the subject matter, with a great ear for a really good hook line.  So don’t be fooled, while the lyrics and song titles certainly suggest trial and tribulation —  and for sure growing up can be a bummer — to my ear there’s a joyous life affirming energy that runs through this album as a whole.  You get the feeling you’re listening to a company of friends who really love what they’re doing and want to share that joy with you.  What better way for the young artist to escape the clawing strictures of religious fundamentalism in America today.

The opening track is titled ‘Another Year’.  We start with a dissonant tremolo string pad and slow simple left hand piano chord pattern with church choir like harmonies over a loose brushes on snare backbeat all to good effect. Cohn’s vocal is measured and deliberate as the strings rise and fall over lines such as “running from what I am”, and words about regret and change. There’s a brief interlude where the fiddle picks up the vocal top line which gives way in verse two to a beautifully recorded rich big body acoustic guitar that moves the song forward very nicely.

The song builds to a crescendo lamenting the finding of love in all the wrong places and tracks, almost without pause, into  ‘Sins Laid Bare’.  Here we have a more traditional folk arrangement with prominent fiddles and mandolins following the intricately worked out melodies.  The arrangement climaxes and drops relentlessly until a final understated epiphany.  There is a beautifully controlled energy in this recording.

‘Won’t Come Back’ gives drummer Alex White plenty to do with a sharp incisive drum pattern in the foreground.  Each song arrangement has elements not heard in other songs on the album which helps maintain interest to the final track.   The album finale is a raw track called ‘Where You Go, There You Are’  which has a hint of a Springsteen quality to the vocals and of the ‘Devil Goes Down to Georgia’ to the fiddling.   You just know these songs are going to be huge crowd pleasers and we can only hope some UK dates are in the pipeline.

A little something to ward off the evil spirits in the new year.