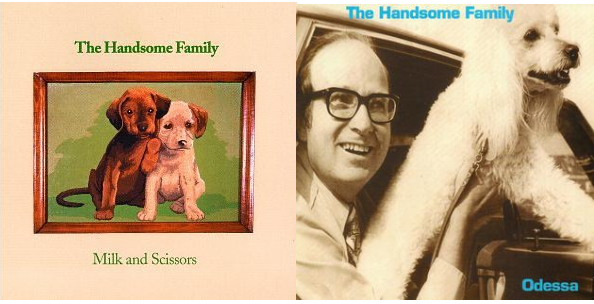 It seems 35 million people think that the Handsome Family created something special having been chosen to provide the first series of, ‘True Detective’, with its title song, ‘Far From Any Road‘. That’s the remarkable number of hits it’s had online and, as much as any one track, it sums up their appeal. Coming from their sixth studio album, ‘Singing Bones‘, released in 2003, it provided just the perfect unsettling introduction to a series that may well have been one of the best ever by HBO.

The first two albums that this duo released, ‘Odessa (1994)‘, and its follow up, ‘Milk and Scissors (1996)‘, are being re-released. Reviewing such a singular combination as Mr and Mrs Sparks becomes challenging given their longevity and idiosyncrasy. It’s not easy to find a take that hasn’t been explored before; these pair haven’t quite cornered the market but if you are looking for slightly off-kilter, clever, generally insightful lyrics with a trademark instrumental sound delivered in a deadpan style, then this combo fit that bill.

Handsome Family lyrics can seem simplistic, though it is wise not to be fooled. An other-worldly, naive take on life can easily become embarrassing in the hands of some, though others along with Brett and Rennie manage it quite well. Jonathan Richman has the knack in songs like, ‘Government Centre‘, delivered in a way that’s just bound to make you smile.

“And they got a lot a lot a lot of great desks and chairs / Uh-huh, at the government centre / We gotta make the secretaries feel better / When they put those stamps on all those letters”

Do you want to laugh or cry at his aching broken-hearted pleas regarding Hippy Johnny in, ‘I’m Straight‘. ‘She Loves You‘, this most certainly is not;

“I saw you though today / Walk by with hippie Johnny / I had to call up and say how I want to take his place / So this phone call today concerns / Hippie Johnny / He’s always stoned, he’s never straight”

There are those who have failed to communicate their singular insights clearly – Sufjan Stevens for instance, ‘Concerning the UFO Sighting Near Highland, Illinois‘,

“When the revenant came down / We couldn’t imagine what it was / In the spirit of three stars / The alien thing that took its form / Then to Lebanon, oh, God! / The flashing at night, the sirens grow and grow / (Oh history involved itself) / Mysterious shade that took its form (or what it was!) Incarnation, three stars / Delivering signs and dusting from their eyes”.

I’m sure someone will know exactly what it means – but it’s less than obvious?

So these two albums represent the igniting of a special flame that has lasted for a quarter of a century and is still going strong (shame about the postponed summer tour). ‘Odessa ’, Brett Sparks birthplace, starts with a very unfamiliar sound on, ‘Here’s Hopin’, crunching distorted guitars, which overwhelm the song. It’s not particularly enjoyable and not what might be expected by those familiar with the band. The use of a drummer seems to do nothing for the music.

Just to throw everyone off guard the second track, ‘Arlene’, is exactly what we might expect – a mid-tempo murder ballad with everything present that we came to know in the Family’s later work.

“Arlene, you wouldn’t even let me hold your hand / When I stopped you in the road you just screamed and ran”.

Unfortunately though, heavy-handed guitar playing with little to recommend it tends to dominate the album, drowning out the heart of things – the lyrics. This reaches its low point on, ‘Big Bad Wolf‘, which is unremitting noise with an almost unlistenable vocal from Ms Sparks. Brett’s voice is not well served by the guitar sound and his singing seems to get lost especially when compared with, ‘Milk and Scissors‘, where following the narrative is much easier.  This is a band that above all is about storytelling. Neither partner seemed particularly proficient on their instruments initially and perhaps a few power chords and distorted guitar served to cover the deficiencies? Later albums, ‘Singing Bones (2003),’ for instance, have a much wider and engaging musical palette. I’m not familiar with everything they have produced but that album, ‘Twilight (2001)‘, ‘Last Days of Wonder (2006)‘, and even, ‘Live at Schubas Tavern (2002)‘, all eschew the harsh guitar sound of, ‘Odessa’, – for the better.

As if to throw a curve-ball (and we wouldn’t expect anything else) The fifth track on, ‘Odessa’, ‘Water into Wine‘, is purest country hokum as the spirit of Gene Autry gets off his horse to give us a religious lesson. Nonetheless, occasional respite notwithstanding, the abiding impression of this first album is one of misplaced and grating guitar. The roots of the duo’s later successes, particularly lyrically, are clearly present but its a long way from, ‘Odessa’, to the triumph of, ‘Far From Any Road’.

‘Milk and Scissors‘, recorded two years later comes much closer to what most love about this band. The third album, ‘Through The Trees‘, is often touted as one of, if not the best offering from the Handsome’s; the point being that big strides were made in the space of 4 years and three albums as the trademark sound became established and refined.

Not to say that there are not the occasional bursts of animation, however, the riffing on, ‘Amelia Earhart vs The Dancing Bear‘, is melodic and does not detract from the lyric or the track as a whole. ‘Emily Shore‘, captures an Emily Dickinson type figure.  Ms Shore, whilst dying young, still left a prolific and authoritative body of written work. “At night her heart pounded holes in her chest / Death, like a bird, was building its nest”.

‘Amelia Earhart‘, speculates movingly on the pilots dying moments: “And as the cockpit burned, she couldn’t help but smile, recalling a dancing bear she’d seen as a child”.

‘#1 Country Song‘, is just that – a convincing lovelorn lament with nary a cut throat or disembowelled innocent in sight: “I wish my foolish heart could find somebody new, but I just can’t stop loving you”. It’s a straightforward country tune – and this is by far the better of the two albums.

The Handsome Family justifiably rate very highly but the conclusion is that much better follows these two offerings which may be for completists only.  There may be those who like the sometimes lumpen riffing of the first – but its not the sound that we have come to associate with this wonderful pair; more it is the sound of artists learning their craft and refining their approach.

‘Odessa‘ offers a different insight into the early life of the Handsome Family, whilst ‘Milk and Scissors‘ is much closer to the finished article and of the two is the better buy.

Early stirrings of one of the great duos