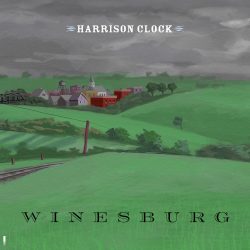 Harrison Clock has been on the scene for thirty odd years and has forged a career largely under the radar with his first full-length album ‘On Greenwater Stream’ (a double LP collection of 20 songs) having only being released in 2016 via Birs Recordings. His follow-up record ‘Winesburg’ is a concept album based on a 100-year-old novel by Sherwood Anderson about a fictional town in Ohio and has conveniently been released in celebration of the centenary.

The record’s origins began in the early 1980s when Harrison Clock was given a copy of the book by a Dr ‘LA’ Brown and some months later, when they met again, a collection of poems inspired by the book which Brown insisted should be used as inspiration for songs and so, Clock went to work “right away” resulting in the release of this record many years later.

The album begins with the almost entirely instrumental ‘Andersonville’ which ebbs and flows from a soft piano ballad through to a mid-paced acoustic track and is a very disjointed beginning, with the constant throughout being the repeated line “still in Andersonville” – a peculiar choice for an album opener. However, the record soon picks up with ‘Sophistication’ which is a bit more straightforward in terms of musicality, but it isn’t until the third song ‘Shadow Friends’ where the album really gets going. ‘Shadow Friends’ is a wonderfully melodic piece of folk music with Clock singing over an acoustic guitar and is an early highlight of the record.

‘Trunion Row’ is another curveball as it launches straight into an electro beat – again another jarring choice sonically – and at another end of the spectrum to the previous track, to the point where it almost sounds like a different artist. That said, the song adds both a change of pace to the record and some variety to the sound as it is well-executed, albeit somewhat unexpected. The rest of the tracks on the record revert to a more traditional sound with acoustic guitars and percussion and the occasional use of piano going back and forth from tender ballads (‘An Awakening’) to more upbeat, almost rock songs (‘Wash’) which make for a well balanced listen throughout.

Lyrically, the majority of the tracks are relatively dense and seem to stray from the verse-chorus-verse formula with the hooks lying in the melody of the vocal throughout, as opposed to emphasizing an obvious chorus. Whether this is intentional or not is somewhat speculative, however, the most important thing is that it not only works in the context of a concept album, but also as a solid standalone record in its own right.