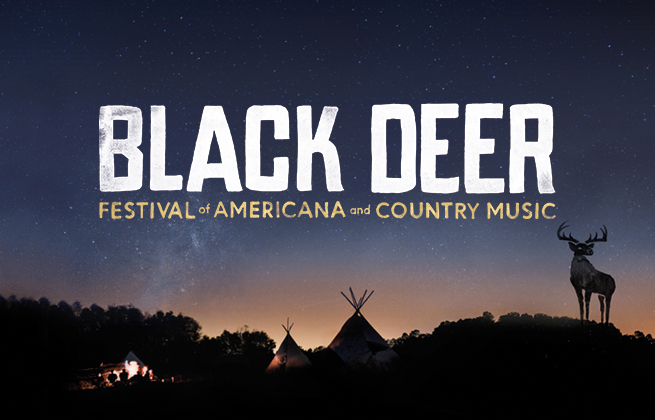 The Black Deer Festival is a passionate celebration of both the music and the culture of country and Americana. Set in the beautiful countryside of Eridge Park in Kent, The Deer Park transports festival-goers to a world away from the everyday, in which a joyful, community atmosphere permeates every aspect of the experience. Across various stages, Black Deer showcases emerging artists as well as a fabulous selection of established acts. This is only the festival’s second year and yet it already feels incredibly well-established. In 2018, Black Deer won ‘Best New Festival’ at the UK Independent Festival Awards; ‘Music Event of the Year’ at the Event Production awards; and ‘Event Organiser of the Year’ from the National Outdoor Events Association.

Aside from the music, Black Deer offers delicious food experiences, including cooking demonstrations, masterclasses and competitions centred around the Live Fire tent. There’s also an emphasis on family fun; described by Black Deer as: “…a festival within a festival,” a range of adventurous activities directed at ‘Young folk’ ensure that children are not forgotten. From den-building to woodcraft, screen printing to music lessons, cowboy tales to face painting, there’s much to enjoy. Perhaps most exciting, are the singer-songwriter competitions for children on the Papermoon Stage.

An outdoor, independent lifestyle is marked in so many ways. Enthusiasts can check out the custom motorcycles or shop for crafts at the artisans’ stalls. Music is at the heart of the Black Deer experience but there is much more to escape to: a community and a way of life to immerse yourself in.
One of the festival founders, Gill Tee, describes Black Deer: “Since the very start when Black Deer was just an idea, it stemmed from a love of the music…a love of the music and all the great things that come with it; a close-knit community, a simple way of life and the great outdoors. We were told after year one that the festival had a unique feeling of warmth and everyone no matter their age, was made to feel welcome.” See the full interview with Gill here: https://americana-uk.com/interview-gill-tee-co-founder-of-the-black-deer-festival

Black Deer has established some important partnerships. Perhaps the most significant is the collaboration with Supajam, an organisation that supports young people in developing careers in the music industry. The students have been given the opportunity to manage the whole weekend’s entertainment on the Supajam Stage. What a wonderful experience for those involved: unforgettable, life-changing.

The spirit of Black Deer is, perhaps, summed up in the story behind Hayley’s Bar, which is a tribute to festival-founder Gill Tee’s brother, whose guitar-playing and love of country had a life-long impact on her. He would be there, in that bar, soaking up the party atmosphere and loving the songs… Which takes us back to the quality of the music. After attracting the likes of Jason Isbell to the 2018 event, the organisers have managed to deliver another stellar line-up. There are so many exciting new artists and well-established acts deserving of a mention but here’s just a small selection from the magical feast Black Deer are serving up, with three acts to look out for each day.

Kris Kristofferson & the Strangers
The appearance of Kris Kristofferson on the weekend of his 83rd birthday is a tremendous coup for the Black Deer organisers. Amateur boxer, army helicopter pilot, Golden Globe-winning actor (for the 1977 version of ‘A Star is born’), multiple Grammy-winning songwriter and performer and one of the famed Highwaymen, Kristofferson is a true legend. At Black Deer, he’ll perform with Merle Haggard’s band, ‘The Strangers’, on Friday. With such a wonderful back-catalogue at his disposal, the price of entry is worth it for this alone!

Ferris & Sylvester
When Issy Ferris and Archie Sylvester sing, it is as if they were born to be heard together. Their harmonies are beautiful, voices intertwined and so engaging in combination. Their fresh sound is a blend of country, folk and pop. It works. After a string of well-received singles and Eps, a full album is expected next year. Watch them at Black Deer on Friday and say that you saw them at the beginning.

Ida Mae
Ida Mae are the duo Stephanie Jean and Chris Turpin, whose debut album, ‘Chasing Lights’, has been released just in time for Black deer. Their distinctively modern take on bluesy rock is full of confidence. It’s a sound so distinctive with such a strong sense of identity that the band will be one that festival-goers remember long after Black Deer is over. The great Ethan Johns (also performing at Black Deer, by the way) produced the album, helping to create a dazzling, memorable debut. Ida Mae will play on Friday.

Band of Horses
After five studio albums, including the Grammy-nominated ‘Infinite Arms’ in 2010, Band of Horses need little introduction. Formed in Seattle by the talented singer, Ben Bridwell, the band have made a name for themselves, creating vibrant, hook-laden indie-folk-rock. Their songs are catchy blends of styles and instruments with superb production values. Band of Horses headline Saturday night and will be certain to fill the Deer Park with their euphoric anthems.

Roseanne Reid
Reid’s debut album, ‘Trails’, has been warmly received thanks to her husky voice and the successful mix of styles. The bluesy folk songs and those authentic, emotional vocals, suggest that Reid has a fabulous future. Steve Earle is a supporter and provided vocals on ‘Sweet Annie’. Earle describes her as, “An outstanding songwriter.” High praise from a chap who knows a thing or two about the craft. Indeed, Reid’s song, ‘Amy’, beat 160,000 other entries to win the International Song Competition based in Nashville. Reid has a bright future ahead…catch her now at Black Deer on Saturday.

Ryan Bingham
The gruff-voiced Ryan Bingham finally released his sixth studio album this year, ‘American Love song’. It’s a noisy, loose collection of rhythmic anthems that will make for an energetic live set on Saturday. It’s a powerful comeback from an artist who won a Grammy back in 2010 for gentle ballad, ‘The Weary Kind’ from the film ‘Crazy Horse’. Bingham is most notable that gritty vocal and for heart-felt, honest music. The intense album ‘Tomorrowland’, released in 2012, was produced in the context of the emotional fallout from the tragic deaths of both his parents. Bingham will put on a tremendous show at Black Deer and comes highly recommended.

Yola
Back in 2017, Yola won the UK Artist of the Year Award at the AMA UK Awards, richly deserved after a stunning vocal performance on her debut EP, ‘Orphan Offering’. Opening track, ‘Home’, is simply beautiful. She has recently followed this up with a critically-acclaimed first album that showcases a blend of styles and genres. To experience Yola, live on Sunday, with that booming voice, will be one of the festival highlights.

Lucero
2018 saw the release of Lucero’s ninth studio album, ‘Among the Ghosts’. It was a gritty, driving, rocking affair that was consistently excellent throughout and served to showcase Ben Nichols rough, worn vocals. Expect the new songs to translate well to the live experience. Lucero is Spanish for ‘bright star’ and, after twenty years together, theirs is certainly still rising. Lucero will rock the Deer Park on Sunday.

Billy Bragg
Politics and activism run through the songs of Billy Bragg, whose varied career has taken in appearances on Top of the Pops, writing books, a Grammy-nominated collaboration with Wilco and joining the folk-collective, ‘The Imagined Village’. Recent albums, such as ‘Tooth & Nail’, have successfully breached the album charts, demonstrating that Bragg’s brand of folk is as relevant as ever.

Bragg has even developed a new approach to his performances for his 2019 tour, titled ‘One Step Forward, Two Steps Back’. He’s spending three nights in each city on the tour, performing songs drawn from across his career on the first night, tracks from his first three albums on the second night and then songs from the next three albums on the final night. Bragg continues to keep it fresh! His festival stop-over is on Sunday.