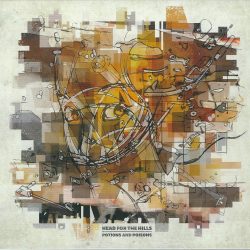 If you enjoy good, unflashy, down to earth Bluegrass music then this album will definitely appeal. Head For The Hills are a 4 piece band from Colorado who boast a very healthy, no-frills approach to their music. Between them, Adam Kinghorn, Joe Lessard, Sam Parks and Matt Loewen play guitar, violin, mandolin and bass and that pretty much covers what you will hear on this album.

They’ve roped in some friends to provide a bit of percussion and some fuller string arrangements on a couple of tracks but, other than that, it’s just the band, their instruments and their voices on a batch of 10 original songs on what is, apparently, their fourth album. The result is, as their press release says,  a “collection of reflective but buoyant music”. It’s a solid album with some excellent material, well played and well presented.

The album gets underway in fine style with Afraid of the Dark, a good  opener with a cool arrangement, a solid central riff and a great change of tempo on the bridge. There’s a dark edge to quite a few of their songs, which you’d expect when reflecting on the human condition but the band refuse to take themselves too seriously and, while lyrics and arrangements can often be dark they’re also often infused with a little humour, as on the traditional bluegrass sounding second track, Suit & Tie – “If I die in a suit and tie don’t read me my last rites”.

Their clever approach to lyrics is never more apparent than on the title track Potions and Poisons where, in addition to some dark humour, they also show a deft hand with alliteration – “We’ve got a passion for potions and poisons, a pitiful penchant for that which destroys us”; a song that concludes with the observation that “quitting you is better for my health”.

There are a couple of instrumental tracks for the bluegrass purists, Floodwaters and album closer Buckers and some fine fiddle playing on a number of other tracks, most notably Telling Me Lies which is as good an example of a bluegrass song as you could hope to find. There’s also a very nice string arrangement on Kings and Cowards that makes good use of guest players Ryan Drickey on viola and Dana Shin on Cello.

Potions and Poisons isn’t an album that’s going to set the Americana charts on fire or make major converts to the music but if you like your American roots music uncluttered with digital samples and excessive arrangements, then you’d do well to check out Head For The Hills and this, their latest offering.