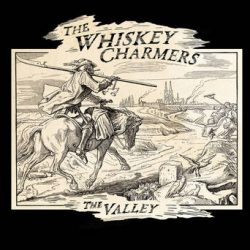 They may not have invited the audience to lick peanut butter off their chests like Iggy Pop, but Detroit band The Whiskey Charmers hold their former neighbour in high esteem. “Clearly Iggy Pop is doing something right. It’s really inspiring to see that he is still out there performing at age 70 and still shirtless. This might be a great way to connect with our audience,” reckons singer Carrie Shepherd, suggesting that guitarist Lawrence Daversa be the first one in the band to try it out.
Citing a diverse mix of influences from Iris Dement, Lucinda Williams and Loretta Lyn to AC/DC, Dio and Mark Knopfler, The Whiskey Charmers were recently voted one of the top ten groups in Detroit; a city that has a long and glorious musical history: from Motown and MC5, to the aforementioned Mr. Pop and techno pioneers Derrick May and Carl Craig. The Charmers new crowd-funded second album The Valley is blessed with a Dramatis Personae which features a host of out-there characters. “We offered these credits as well as our silly instrumental Orchestra Pit list, as part of our crowd-funding. Each person got a credit as well as the CD, vinyl, T-shirt, sticker and button.”

Cast members include Animal Wrangler, Monster Truck Repairman and Wilderness Expert. All the kind of roles that will come in very handy next time the band hit the road. The Whiskey Charmers are a busy, gigging outfit, juggling concerts with the demands of raising their families.

They have been described as country noir, outlaw, and roots, however, they prefer to describe themselves as Ameripolitan; the term coined by Dale Watson, that covers all those styles that aren’t mainstream country and which has its own annual award ceremony. Ray ‘Can you open a window?’ Benson from Asleep At The Wheel presented last year’s Ameripolitan gongs. It’s quite likely that The Valley might garner one such, this year.

The Whiskey Charmers first, critically acclaimed and eponymously named album was recorded live over 11 hours; The Valley took them 14 months. This time around they decided to track the album so they could experiment and add some overdubs. It was a very good decision. The production is excellent. They have produced a set of superbly crafted songs that run the gamut from doom, despair and insecurity to coquettish seduction, written mainly by Carrie along with breath-taking guitar work by Lawrence. He may claim Mark Knopfler and Richie Blackmore as influences, but Link Wray’s stylings are also inherent in his engaging playing. Lawrence also adds some delightful lap steel to Melody, a gorgeous song that uses the process of composition as a metaphor for the emotionality of the human condition:

‘If I laid down a melody would you follow me tonight/ If I laid down a harmony would it make everything alright?/and just for fun add bass and drums/will you be here when the morning comes?/count me in to sing again/hope you don’t mind the state I’m in?’

Carrie is adept at zoning in on the raw emotion of a situation and reflecting at length on those emotions within the safe space of a song. She is a big fan of Willie Nelson, and in one of The Charmers video’s they have included a photo of his pronouncement that:

“99% of the world’s lovers are not with their first choice. That’s what makes the jukebox play.”

Now, where’s that dime? Carrie understands the truth of the hypothesis Big Willie has proudly presented and is in complete agreement with his thrust. “I think it’s difficult to find someone and when you do, the timing and circumstances are not always right. Hence a lot of heartache and unrequited love. I think a lot of people write songs as a way to work through that heartache and that listeners respond to them because they can relate. I know this is true for me as a songwriter. Once after I sent Lawrence a song, he told me that he thought to himself ‘This song is great. She must have been feeling really awful.’ I thought that was pretty funny.”

Me too. Now, I might be mistaken but would it be fair to assume that a beverage or two often encourages the creative process? What’s their favourite type of whiskey?  “It’s hard to pick a favourite. But we like Bushmills, Jameson, Paddy’s, Redbreast and love trying new whiskey.” So can they reveal the secret of how they charm whiskey, please? “Lawrence coaxes it out of a woven basket with his face-melting guitar solos and I snatch it out of the air.” Ah, I see. That explains it then. Cheers!

Like some modern update on the Rolling Thunder Revue, The Whiskey Charmers circus continues on apace. Their groovy cast also includes a Spiritual Advisor. What does he do? “Our Spiritual Advisor connects us to all that ebbs and flows in the universe. And sometimes loans us money,” Carrie reveals. It must be great to have your Guru in situ? “He told us that we were really smart. I said ‘Oh, great Spiritual Advisor, if we are so smart, then why don’t we have any money?’ He replied ‘Because you don’t care about money.’ However, my landlord cares about money. As well as the gas company.”

Their Guru is very perceptive. The Whiskey Charmers love making music and are in it for pleasure, not for the money. “We really just perform the songs and hope that people like them,” affirms Carrie. “We enjoy performing and we hope that comes across and helps us connect to the audience.”

What’s next on their agenda, then?  “We will now try slathering ourselves with peanut butter.”