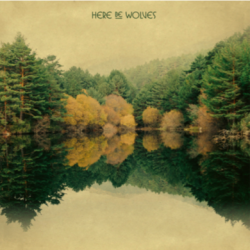 Here Be Wolves began in 2018, when Karla- Therese Kjellvander met Mikael Petersson. Kjellvander’s musical journey began in the Swedish hardcore scene of the 90’s, and has slowly made her way to folk music over the years whilst working with her ex-husband Christian Kjellvander, who also appears on the album. Petersson is a songwriter at heart, his lyrics often inspired by his deeply held religious beliefs. After the two met they quickly decided to work together, but had to find a way to bridge the considerable geographical gap between them. Petersson sent Kjellvander a whole host of songs to whittle down, and she picked a handful to work on which eventually became the set of songs on their self-titled debut album, ‘Here Be Wolves‘.

The recording of the album was far from smooth, however, with Kjellvander being struck by a severe throat infection. Hardly speaking for six months, she nevertheless persevered with singing – developing a new approach which was less taxing on her voice. This resulted in the wonderfully ethereal vocal which weaves its way through the record with a powerful fragility.

The vocals on the album really do hold the whole thing together. The duo nearly always sing together, with Petersson’s breathy bass being accented by the sparkling of Kjellvander’s gentle tones. The sound it creates is soft yet strong, fragile yet powerful, and coursing with an other worldly beauty. This is matched by the sparse and well-used instrumentation, which more often than not is simply a melodic backdrop against which the vocals can shine.

This sound was very much created deliberately; the duo have said there aim when recording was to keep the focus on the vocals, and create a warmth and a beauty with a touch of something mystical – this they have certainly managed.

There are some things that may detract from the record – the overtly religious lyrics may be a turn off, for one. However, religious lyrics are fairly standard fare in folk music, especially American folk music, and so fans of the genre may perhaps be less perturbed than a mainstream audience would be. The record may be a little one-note for some, too. It is reverby, atmospheric, beautiful music, but it never really develops over the course of the album. This is not a bad thing, it is a beautiful record, but listeners left cold by the opening track will find little else to pull them in if they stick around for the rest.

‘Here Be Wolves‘ is a wonderful debut with plenty to offer, it drifts along with a dreamlike ambience that is pretty and pleasing, but subtle and ultimately and somewhat restrained, not delivering the emotional sucker-punch some may be hoping for.

Ethereal, atmospheric folk. A strong debut from the Swedish duo