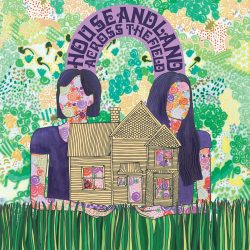 This is hard core American Folk Music – definitely not for the faint hearted! House and Land are Guitarist/multi-instrumentalist Sarah Louise and fiddler/banjoist Sally Anne Morgan and they draw their rich and fascinating material from Appalachia, the Ozarks and, interestingly, from the UK.

House and Land take an innovative and exciting approach to some very traditional material, so their interpretations are rooted in the past but not restricted by it; they’ve taken the time to properly understand their material, to get inside the songs to the degree that they know how they should sound and can then start to build their own arrangements, in a way that is both modern yet still based on the historical delivery of this material. The voices of this duo blend very well together in those Appalachian style harmonies that can sound quite harsh but are ideally suited to songs of this kind.

The album gets under way with the traditional murder ballad, ‘Two Sisters’. Though generally considered to have originated from the North of England, House and Land draw their version from Artus Moser’s North Carolina Ballads and it’s an interesting musical variation on the original Northumbrian version. One of the excellent things about this album is that it comes with a fairly extensive set of liner notes, where the source of each of the songs is clearly identified – very useful for students of more traditional music, where regional variation can throw up line changes, additional versus, even indications of local dialect, as in album closer ‘Ca the Yowes’, or ‘Call the Ewes’ – “Ca the yowes, by the knowes, call them where the heather grows, call them where the burnie flows, my bonnie dearie”.

House and Land approach their material with a lot of attention to detail and the album is all the better for it. The more you listen to this album the more you’re drawn into the songs and the stories they tell. Instrumentation is sparse in style but often subtly layered with instruments that complement each other but are not obvious combinations and, so, serve the songs well – ‘Blacksmith’, based on the Shirley Collins version of ‘The Blacksmith Courted Me‘, is particularly haunting and the duo’s musical abilities are also well showcased on instrumental ‘Carolina Lady’. Between them Sarah Louise and Sally Anne Morgan play over a dozen different instruments over the seven songs on the album!

“Across The Field” is, perhaps, an album that will appeal more to the folk purist but it does deserve the widest possible audience. House and Land’s extremely creative interpretations of these songs are a testament to the enduring quality of traditional folk music and its continued relevance to human society; songs that root their subjects in the community and continue to explore the human condition long after they were first written.