Jim Walker is managing director of Brighthelmstone Promotions. In 2017 he started a festival in his hometown of Hassocks, West Sussex featuring two of our greatest loves – Americana music and good beer. The Mid-Sussex Americana beer festival is running for a third year at the Hassocks hotel in East Sussex on the 24th of August and involves a range of established and emerging talent such as William The Conqueror, Danny George Wilson (of Danny and the Champions of the World), Trevor Moss and Hannah Lou, Lucas & King, Jamie Freeman, Loud Mountains, Noble Jacks, Porchlight Smoker and Ben Featherstone. Mark Underwood of Americana-UK caught up with Jim to talk about plans for the festival and the promotions business.

The festival retains its uniquely British character, Jim. Tell us a bit about how you’ve gone about putting the bill together this year?
It’s my celebration of UK artists. I often put a variety of US-based acts and want to support the UK based musicians. I always try and vary the line-up from established to up and coming. For example, Porchlight Smoker have been performing for years and are a must-see live act and Lucas & King are at the start of a musical journey, and that journey should be bright as they recently won the Fender undiscovered artist award. William The Conqueror are going from strength to strength and Noble Jacks are a top festival band. It was also a great opportunity to book Danny George Wilson from Danny and The Champions of The World and Bennett Wilson Poole solo. He reminds me of Springsteen solo and that’s not a bad thing.

How long in advance of the festival do you start booking bands?
We started looking at the headliner before Christmas and for one reason or another that fell through. It took a lot longer to finalise the line-up this year. But we got there!

There are a number of names that might be new to Americana-UK readers such as Noble Jacks, Porchlight Smoker, Loud Mountains, Lucy Feliz, and Ben Featherstone. Can you tell us a little bit about them.
Noble Jacks are high energy and recently sold out Concorde 2. Imagine The Levellers with a Celtic twist. Porchlight Smoker are one of my favourite Brighton bands. Top musicians and incredibly underrated. Members of the band are in Hatful Of Rain and perform with Amelia White and The Long Haul. Loud Mountains will be launching a debut album. Lucy Feliz is a captivating performer with incredibly deep lyrics. Ben Featherstone is the least Americana at the festival. You could probably class him as singer-songwriter / Neo-Classical and he’s also written a ballet.

I know the main music room is indoors but I thought the small outdoor stage was a great idea last year. Will that be running again this year?
Yes, we will have an outside stage and this will be announced week commencing 5th August. Proper Cycling Cafe will be hosting this.

Any particular highlights from last year for you?
Izzie Walsh was fantastic and I think she is going places. I also loved the airing of the new Danni Nicholls songs that ended up on ‘The Melted Morning’. Naturally, I loved the nostalgic feel of Bennett Wilson Poole and the return of Society was something else.

“Bringing what I listen to in my front room to a live room near to you” has become something of a personal motto for you. You’ve promoted some great acts of late through Brighthelmstone, including Yola, Hayes Carll, Jesse Malin, Sam Morrow, Will Hoge, Massey Ferguson and Peter Bruntnell. I understand you’ve also got a really strong portfolio of acts in the coming months at venues in Sussex and London. What exciting gigs should we know about?
I highly recommend all of them 😉 You can find them here:
Joking aside, Charley Crockett puts on a great show and will be performing with Jaime Wyatt, Ohtis are a top tip and will blow your socks off, and Caroline Spence is a sublime live performer.

Are there are any common denominators among the more successful acts you’ve worked with?
It’s all about live these days and being a top and captivating live performer is vital. Take Fontaines D.C. (not Americana). Relentless live touring way before the album came out and now they are nominated for a Mercury Music Prize. Great band and worth checking out.

And given the changes in the industry, do you think it’s become easier or harder to produce music events?
More competition. But I generally only ever book acts I would only listen to myself and get my head down and promote the heck out of it.

I understand you acted as production manager for AmericanaFest in Hackney in January. The festival involved 58 acts with 5 backline deliveries across 5 venues for 3 days. Tell us a bit about how you got involved with the festival.
Although my wife wouldn’t necessarily agree when push comes to shove I think I am pretty organised. I was given the role as production manager for AMA UK for the London and Nashville event 3 years ago as I have had previous experience in running venues for The Great Escape Festival, Truck Festival and YNot Festival. It’s a role that you need a 360 degree understanding of the industry. It entails production understanding, sales, artist liaison, trusting the team and recruitment. The trick is doing all the preparation before and then delivering it. Respecting and valuing each venue is also vital. I visit each venue minimum a couple of times before we deliver the event.

I know you gave opportunities and responsibility to a number of younger people and volunteers, who apparently rose to the challenge. What advice would you give any of them who might have an eye on breaking into the promotions business?
Believe in yourself and never forget we are always still learning. It’s definitely not a 9 to 5 job. It’s super crazy hours and a lifestyle choice.

And who would you recommend that our readers should be looking out for or listening to at the moment?
Ohtis ‘Curve of Earth’
Caroline Spence ‘Mint Condition‘
Hayes Carll ‘What It Is‘
Jeb Loy Nicholls ‘June is Short, July is Long‘
Peter Bruntnell ‘King of Madrid‘
Daughter of Swords ‘Dawnbreaker‘
Fontaines D.C.

Here’s a Spotify playlist put together by Jim, featuring acts appearing at the festival.

Tickets for the festival are available here and Jim has also kindly agreed to give away two tickets to the festival to Americana-UK readers. A random entry will be pulled out of a hat for a pair of tickets. If interested, please email: mark.underwood@americana-uk.com by the 9th of August.

Update: The winner of the ticket draw is Lesley Follington who gets two free tickets to the festival. 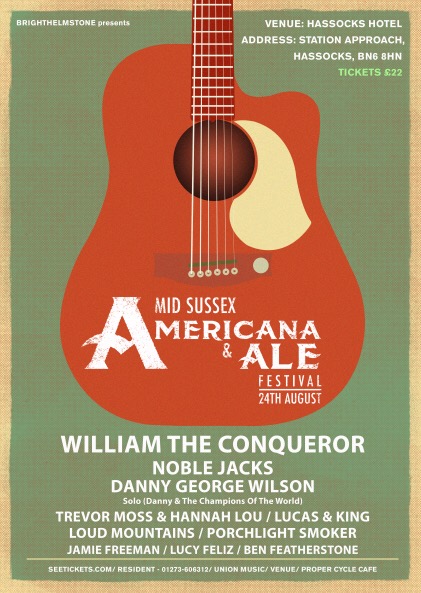