Pete Gow, front man for the late Case Hardin, one of the UK’s foremost hard rocking Americana styled bands, surprised a lot of folk when he released his first solo album, ‘Here There’s No Sirens’ back in April. Gone was the rollicking and hard rocking thrust of Case Hardin, replaced by intimate stripped back songs, mainly acoustic and awash with bold brass and string arrangements. And while the sound of the album may have surprised many folk, it was praised across the board, with AUK’s review saying it was, “a deeply personal and intimate set of songs with some great lyrics and astute musicianship, all recorded wonderfully and delivered with heart.”  Already, in some quarters, it’s been mentioned as likely to be in the short list for UK album of the year at the next AMAUK awards ceremony.

The album’s live launch gig, at London’s Network Theatre, saw Gow and his band accompanied by The Siren Strings and, again, it has been universally lauded. Now, Gow is set to take the same line up on the road for a set of shows, beginning this week. Prior to this he took some time to talk to Americana UK about the album.

First off, can we say congratulations on the success of ‘Here There’s No Sirens’? It’s had some great reviews and from what I’ve heard, the album launch show with the string section was a triumph. The album is quite a departure from the Pete Gow people have known from the Case Hardin albums. Has the reception surprised you?
Thanks Paul… I think ‘pleasantly surprised’ sums it up. It was clear – even from my initial conversations with Joe Bennett (who produced the album) – that this project was going to be different to anything that had gone before it, so there is always that air of concern over how it would go down. It is, as you say, quite a departure from a sound Case Hardin had become pretty well recognised for. So I was delighted, not only that Clubhouse Records and Del at Ark PR continued to show their unswerving support for a new direction, but that music buying folks clearly seem happy to go with me wherever we decide to take these songs … for now!

What inspired you to make a solo album and in particular, one which is so different from the tough country rock sound of Case Hardin. Were these songs written especially for the disc or were they written over a period of time but not considered really suitable for the band?
The whole thing came together very quickly. Around the middle of 2018, Case Hardin were dragging our heels on making a follow up to ‘Colours Simple.’ I had a decent collection of songs that I had been sat on for a while, and it became clear that another year was going to pass without us recording, so the motivation for doing something outside of the band was as much an act of keeping our name out there, in some fashion, to begin with. But we very quickly realised we were on to something quite special and stand- alone.

The departure in sound from Case Hardin was an absolute necessity.  I didn’t want anyone to listen to an album out under my own name and think that it sounded like the band’s records, just without the band playing. That would be truly pointless. For example, if I’m going to have lead guitar on my songs, I’m going to use Jim Maving – there is no one else for me – so if it wasn’t going to go out under the Case Hardin name, I certainly wasn’t going to use another guitarist for the sake of it. So there are no guitars other than my acoustic rhythm on the entire record.

Whilst there are a couple of older songs that had been under consideration for a Case Hardin record, ‘Here There’s No Sirens’ was mainly written after Joe and I mapped out what we hoped a solo album would sound like. I think you can hear that in tracks like ‘One Last One- Night Stand’ and on the new single, ‘TV Re- Runs’ where the instrumental passages were constructed specifically with string arrangements in mind.

As you say, the album was produced by Joe Bennett of The Dreaming Spires and he also did the string and brass arrangements. How early was he involved in the project and how did the pair of you work together in the studio?
He was involved from the outset. The whole idea to do a solo record was, by extension, to do a solo record with Joe. I knew from his previous albums what he was capable of regards production, engineering & musicianship and, from our discussions down through the years, the length and breadth of his influences and I knew I could turn in the songs required for this to really work. If Joe had turned me down, I probably would have dropped the idea of doing a solo album.

Joe produced this record from the guitar and vocals up and was responsible for each track’s direction once the basics were down with Fin Kenny on drums. There was, all the way through the process, a decent, vibrant exchange of ideas. We both know our way around making albums, so it was a lot of fun. I’ve said it before and will likely say it again before this promotion campaign is over, Joe’s production on ‘Here There’s No Sirens’ was just as important as the songs.

Many of the songs seem quite personal and you’ve stripped the sound back, allowing your voice to dominate while enveloping it in some amazing arrangements. Were there any particular influences bearing on you when you were recording, any particular artists or albums which might have influenced what you were trying to achieve?
In my original phone calls with Joe I told him I was thinking about something along the lines of Nick Cave & The Bad Seeds’ ‘The Boatman’s Call’ and some of the string arrangements on Ryan Adams’ ‘29’. Joe point- blank refused to go and listen to those records which, in retrospect, proved a sensible move; he in effect created a sterile corridor between what I thought I wanted the album to sound like and his first impressions of the songs. That said, we’ve since covered Cave’s ‘Into My Arms’, at his suggestion so he clearly listened to it at SOME point!

Can I ask you about ‘Strip For Me’? Most folk have remarked on the fact that it name checks Stormy Daniels but it seems that here you are really delving into the mind set of certain males who think that everything, including women, are just there to be bought, played with and then discarded.
You can, and I’m glad you did. It is a lyric that can easily be misconstrued and the reference to Stormy Daniels is a little shiny and distracting -when I first played it live during acoustic shows audiences started laughing at the chorus! It was written quite recently (and, to your previous question, specifically for the album) when power based male misogyny was first being really held up to the spotlight. I wanted to walk a mile in that guys shoes, not to view and judge his behaviour, but to BE him and believe in the things he believes in. I do think the second verse is more of a ‘right of reply’ from the female perspective, but because I’m singing it and I seem to remain in character, it can – understandably – get lost.

A few of the songs, ‘One Last One Night Stand’, ‘Mikaela’ and the title track seem very personal. Were you writing from experience on these?
I think that ‘up close and very personal’ is a theme running throughout ‘Here There’s No Sirens’. ‘Mikaela’ is a pretty straight forward statement, but ‘One Last One Night Stand’ was specifically written both to open the record and to make a wider, largely hypothetical, point, setting the tone for a collection of songs dominated by relationships and, in places, some of the fears of committing to those relationships when everything up until that point has suggested you are going to fuck it up at some point. Steve Earle calls these his ‘State of Me’ numbers. This is mine.

‘Some Old Jacobite King’ stands out as it is more of a traditional type of storytelling song and I believe that you had previously played it live with Case Hardin. Why did you include it here?
I think there is always a place for this type of song on any one of my records. Those story songs are something I think I can pull off reasonably well, albeit in small doses. So I always try and place one per album, if I’m lucky enough to write a decent one. I hadn’t actually performed ‘Some Old Jacobite King’ with Case Hardin, but it is a song I’ve had for a while and played at a couple of solo shows before recording it for this project. Joe worked particularly hard at getting a performance/ arrangement of that song that allowed it to remain a folk song, but without a traditional folk song delivery.

Just as the album came out, it was announced that Case Hardin had called it a day. Can you talk a little about this?
Yeah, I guess. It was sad at the time, and remains sad. Ten years with the core four of myself Jim, Tim and Andy, and, lest we forget, I’ve been in bands with Andy since I was 19 years old. At the time we split, live, we were on fire, we had three solid albums under our belts and the material for another great record right in front of us, but our time was up. It just wasn’t happening for us as a band anymore. We were all saddened when it was decided to call it a day, but no one tried to tell me I was doing the wrong thing. I fear the chronology might suggest that this solo album was, in some way, responsible for the split, but it was actually not part of the reasoning at all.

Finally, you’re going on the road for four shows with the Siren Strings. Will you be playing the entire album as you did at the launch event?
I’m not sure for these particular shows we will repeat that but it’s a great feeling to know that we can. There was something about the launch – playing the entire record, in sequence, for the first time – that was truly special and appropriate to the occasion.

It will be the same band of myself, Joe, Fin and Tristan Tipping on bass alongside the various members of our glorious Siren Strings section, but what you will get for these dates is a brand new show. In addition to the existing material, we have some new songs, a couple of covers and we just can’t wait to get started and bring this show farther and wider than we have already. 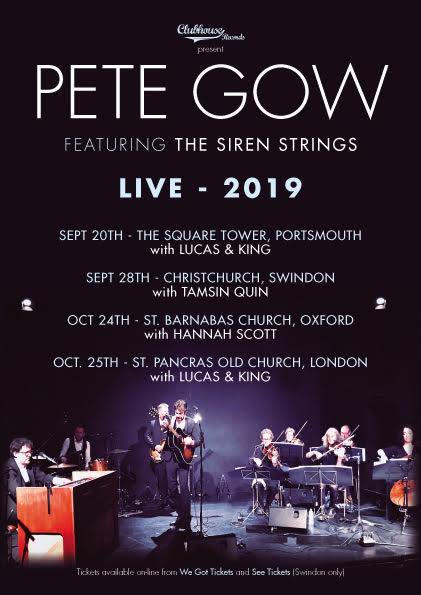