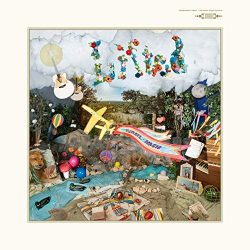 This is Big Music. It’s all about the production, which seems to have everything, with bells on – figuratively on ‘Northwest Stars (Out of Tacoma)’. Kitchen sink isn’t actually listed as an instrument, but if it had been used it would have fitted as well as anything else on this glorious album. Orchestra, choir, endless layers of sound, multi-tracked vocals all lend to a symphonic effect, where the music billows and soars. Which is precisely Israel Nash’s intent. The montage album cover of ‘Lifted’ has clouds, planes, flowers in the air. He wants to have this music lift the listener to euphoria and succeeds; it’s all about positivity.

An instruction on the cover states “File Under Hippie Spiritual,”and Nash is certainly aiming for a higher plain. Inevitably with so much going on, it constantly shows its influences. Brian Wilson is all over this record, and when the fanfare comes in on ‘Looking Glass,’ you would think George Martin had been at the desk. Jesse Chandler handles the arrangements, and knowing his previous key work was with Midlake and Mercury Rev explains much of the feel and sound. Israel Nash is often compared with Neil Young, which is truer than ever here as all these songs are delivered in a high register. But imagine a Young not backed by Crazy Horse, but E.L.O. instead? A more recent reference would be War On Drugs, especially with the sub-Motorik drums on ‘Lucky Ones.’ Nash, though, isn’t aiming for Kosmische, but a purer cosmic reach – dream pop with a psychedelic touch.

Whether the songs stand up individually seems irrelevant. When he still called himself Israel Nash Gripka, he could do the folk troubadour with an acoustic as well as any other, but each album release has been more ambitious, with this fifth firmly putting the soundscape prime over the song. ‘The Widow’ references 1973, but this sound could be placed comfortably any time in the last half-century. A towering achievement of spiritual nourishment.