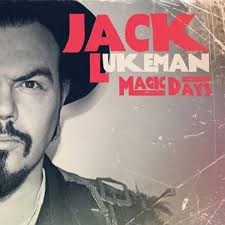 A big sprawling album of styles and influences this is Lukeman’s latest foray into the album market in a career that is bejewelled with high points and successes. First breaking through in the late nineties he enjoyed great success Stateside and in Europe with a series of albums that took college radio by storm as well as producing an album of Randy Newman covers that he performed in a series of live shows with the Brooklyn Philharmonic and garnered praise from the man himself.

So what of ‘Magic Days’? If nothing else this is a grand and enveloping album, beautifully produced with deep production values that mean that every track is couched in original musicality with a core of orchestration and/or earworm choruses. This is not an Americana album per se but there is much to love here, not least Lukeman’s extraordinary voice which reminds of Scott Walker when he sang traditionally constructed songs. A great big velvet beast that can belt out or croon as required. Highlights include the aching ballad ‘You Are The Sea’ where the vocals are perfectly married with the lilting melodies and carried by the simple opening instrumentation and some passing seagulls to the delightful crescendo and conclusion. At once delicate and powerful. Lovely. Lukeman has supported many huge acts not least U2 and this track would not be out of place in a stadium full of lighters held aloft. ‘Diamond Daze’ on the other hand is a melancholic meditation both downbeat and affecting and yet again entrancing as Lukeman’s velvet tones lift it out of the ordinary and the strings remind of Jack Nitzsche at his best.

This is a complex grower of an album that rewards repeated listens as the production and Lukeman’s songwriting chops combine with his fantastic voice to create an individual yet commercial mood of its own.