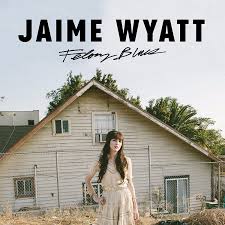 “I stayed out of trouble most the time in jail” is, in its honesty and openness, as stark and discomforting a statement as you would expect an artist to make when describing how they came to make their debut album. But in this case, it’s a real part of the story that led Jaime Wyatt to write and record ‘Felony Blues’. Signed at the tender age of 17, with songs finding their way into movies and TV, it sounds as though Wyatt soon earned her wings as an honorary member of The Eagles and, after robbing her dealer and being served with some rough justice (given the circumstances), ended up serving eight months in jail, followed by six months in rehab, and a further three years on probation. One can only assume that wasn’t the plan.

So, Jaime Wyatt has not had the easiest time of things… but that fact is by no means immediately obvious from her songs which are most jaunty in tone – the album is absolutely not a doom laden, misery fest. As with all good songwriting, you have to invest to hear the story and, if you listen hard enough and long enough, you will get it. Suffice to say From Outer Space isn’t some fluffy love song about star gazing. The lyric “It’s a long way home from outer space” lands a punch to the gut rather more forcefully when you realise that, actually, Wyatt is offering a poignant description of her return from the point of self-destructive isolation. And so the theme of the album reveals itself – a heart-felt collection of largely autobiographical songs about some personal cliff-edges.

Both lyrically and musically compelling, Wyatt’s songs are captivating. As already suggested, they’re not perhaps all that immediate – you have to think your way around them, and sometimes you have to wait for a deliberately clumsy verse to give way to a catchy chorus, but that’s part of their beauty. And then there’s the musicianship: employing a stellar cast of sessioneers (notably, members of the Punch Brothers and Ryan Adam’s band) was in this case not the fodder of a vanity project. Indeed, Wyatt’s deft musical direction sets exactly the right tone for each of the seven songs features here which shift between the stone cold roots rock of Wishing Well, to the country pop of Your Love Saves Me, to the steel-driven honky tonk of Wasco.

Culminating in the implausibly sorrowful and satisfyingly booze-soaked lullaby of Merle Haggard’s Misery and Gin (a song which you can’t help but feel Dennis Wilson should have cut a version of), from beginning to end, there simply isn’t a weak moment on this record. May success result in happiness this time around.