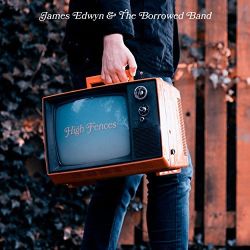 January is a miserable month. The weather’s terrible, nobody has any money, everyone’s back at work for another year’s grind and there’s next to nothing happening musically. Which makes the release of ‘High Fences’ something to celebrate and then some (ok, it was actually released in mid-December but just go with it ok).

The second album from Glasgow man James Edwyn and his compadres is an urgent, powerful set that isn’t afraid to reflect its classic Americana influences but marries them to that Scottish affinity for this music (think Teenage Fanclub or Cosmic Rough Riders), great songwriting from Edwyn, glorious backing vocals from Emma Joyce and excellent playing from the rest of the band. The result is the first great album of 2018.

There are echoes of The Band too in the musical interplay and loose grooves of ‘Get Back Up’ while with the clarion call of ‘Passing San Ysidro’, the delicate ache of ‘Pushing Statues’, the epically soulful ‘Quoting Sagan’, to name but three, everyone will find a favourite song here. Soul in particular is what this album has, by the bucket load. And great tunes. And great lyrics.