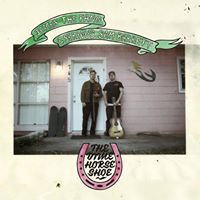 Having spent a few months every year touring the States playing with the likes of Al Scorch, Charlie Parr and The Pine Hill Haints, Yorkshireman Barrett here is on great form with James The Fang (of the afore mentioned Pine Hill Haints) for their second release together.  They are very much old souls, and this could quite easily be a lovely scratchy 78.

Serious and the Fang’s mix of the traditional tunes and their own blend seamlessly, it’s Americana in its truest form – steeped in a sad heart, the weary and the downtrodden, it feels like an album with the spirit of calloused hands and a life spent following a plough. It’s from a different time.

Its delight is, if like me you don’t recognise the traditional tunes, is the old time mix with those cooked up on the skateboard ramps of Leeds and Alabama, where both are equally at home.  I love the idea of Barrett and Fang skating by day (Barrett recently missed a large part of the year playing having broken a wrist whilst skating), then at night whipping up a storm with an ancient twelve string and fiddle.

Fang’s voice is tougher, his fiddle weepy throughout, and a more mournful yodel you’re unlikely to hear in 2017.  This is an album for waltzing in hob nail boots on bare floor boards. It’s the low budget that means its production lets it down, it’s such a great record it’s a shame, its crying out for a record label to pick it up – At The Helm are you reading this?  The fact it harks back to a by-gone time is strangely just what we need right now – there’s a general air of reassurance in two young men looking back and striding forward.

Tunes from the half pipes and ramps of West Yorkshire and Alabama.