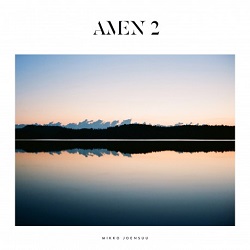 Mikko Joensuu has set himself a daunting task – to release a trilogy of albums in the space of a year. Having been brought up in his native Finland with a strong religious background, the album series tells in sweeping terms the story of his gradual realisation that there is no deity, and the doubt, angst and anxiety that having this prop removed caused him. Which sounds very depressing – but Amen-2 whilst at the heart of this epiphany has a soaring gorgeous sound that carries the listener along like a starship sailing the solar winds. Where Amen-1 held treasures hewn from singer-songwriter introspection Amen-2  couples that same introspection and self doubt to a swirling array of synthesiser sounds. And not the rather annoying clunky electronic keyboard sounds badly imitating other instruments, this is the rich multi-layered effects of a Jean-Michelle Jarre, crafting a soundtrack that can only exists electronically. Coupled with Mikko Joensuu’s lush, dreamlike, vocals and engagingly thoughtful lyrics it’s an irresistibly heady mix.

There’s a definite descent into doubt on Drop Me Down and Dying Rain, followed up by a wildly hedonistic No One Knows, which sounds like a last ditch rallying – “I don’t suppose everyone knows what they need the most” Joensuu sings with an engaging openness before literally hitting a sonic wall of harsh white noise. Everything crumbles down on What Have I Done which sees Joensuu stumbling around with “The Word without a voice” guiltily declaring that “I have broken the promise I once gave” and struggling to contend with “a void where there used to be the sun”. Certainty has gone and all that remains is the endless questioning “what have I done?” whilst the music swirls like a thousand shards of broken glass.

These are all big topics, and Mikko Joensuu treats them appropriately – tracks range from the long to the epic with the final song I gave you all running to over twenty minutes. This piano led song is a lengthy coming to terms with living in a world without the guiding hand of a god and sees Joensuu explaining that “It’s taken me some time to clear up my mind / what used to bring me comfort has now robbed me blind”. It’s painful, but there’s acceptance here as well. I gave you all has a lengthy coda which fades slowly away to be little more than an electronic heartbeat, a slow and steady come down from the emotional highs that have so recently been scaled.

Amen-2 is no let down after Amen-1, from which it differs so strongly, and is making a case that Mikko Joensuu is a musical talent of no small ability. And the conclusion of this trilogy is just around the corner – it should be available in a few months time. Where he’ll go next is anyone’s guess – but on the evidence so far it may well be another complete change of direction that is nothing short of intriguing and rewarding.

Mikko Joensuu’s second album of the Amen trilogy is as rich and rewarding as the first entry in the series. A sonically stunning example of rich electronica.