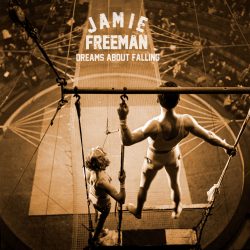 There is a reward for those of us still in thrall to the concept of an album rather than a download. It comes in the form of the good old-fashioned sleeve notes and the added value it gives to the music. If by looking at the list of collaborators on an album we are given an impression of the high regard in which a musician is held by their peers, then Jamie Freeman clearly has an enviable reputation. If supporting evidence was required then the co-writers on Freeman’s latest album ‘Dreams About Falling’ include Angaleena Presley, Ben Glover and Amy Speace while he has employed the recent Grammy winner Neilson Hubbard as producer.

Add Freeman’s track record as a producer with critically acclaimed albums from The Self Help Group and as a multi-instrumentalist, a CV that includes playing drums with Sam Outlaw. For those who may not have come across Jamie Freeman before, there is enough critical info here to make the casual listener sit up and pay attention.

The aforementioned Angaleena Presley duets with Freeman on one of the album highlights. ‘Down Range’ has a gentle piano intro and builds into something special as Presley brings her fantastic vocals to the fore. Freeman is a gentleman as, from the second verse on, he allows Presley to become the driving force in this marvellously constructed song about a home-coming Gulf War veteran. This, surprisingly, is not the Presley co-write on the album. The songwriting collaborator here is Amy Tudor who reappears as Freeman’s writing partner on a very different track. ‘Darker Waves’ has a deep, bluesy groove and has a very distinct feel to it in comparison to much of the album. It is loud and lovely.

Anyone familiar with the work of Ben Glover will hear his influence embedded on his co-write, ‘The Fire’. Fast paced acoustic guitar drives this along at a cracking pace and is the highpoint of achievement on the album. If Americana is a hub that is fuelled by various musical influential spokes then this comes very much from the folk side of that genre. Brandy Zdan has been described by Rolling Stone as a “hero of the highest order” and so it is evidenced by her co-write of ‘Standing On A Star’ which allows Freeman and Will Kimbrough’s brilliant guitar work to shine through – it elevates the track to the status of another standout song on an album that isn’t short of choices in that regard.

With co-writes and duets with the likes of Presley, Speace, Zdan and Glover, this is an album that veers off in different directions at times and, if a couple of tracks don’t quite hit the mark, then that shouldn’t detract from the high quality of much of what Freeman has delivered here.