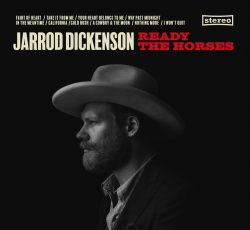 Good God Jarrod can sing. He’s a storyteller with a voice rich as agave nectar; he holds a narrative and bends it however he feels, you hang onto every word. On this set of songs he’s pretty much equidistant between Tom Waits and Michael Buble, and that’s not meant to be derogatory in any way, it’s testament to the way he controls the songs and the audience – the opening one-two of the bluesy belters of Faint of Heart and Take It From Me are big set-pieces full of showmanship  Then he settles down and the simpler Your Heart Belongs To Me shows him in more intimate circumstances his voice even more seductive when near a whisper.

The pacing of the album is spot on, it unfolds like a gig, the intimate is followed by an opening out but not a fully-fledged stormer, keeping the middle of the show for the reflective, for the intimate, for the low-key beauty of California, a country song with a chorus that swells like an eye filling with tears. Then to the theatrical with the Waitsish Gold Rush with ricocheting percussion and dissonant exhalations of horns, then towards the end there’s the rich melancholy of Nothing More that’s as sinuous and golden as a summer afternoon spent illicitly. The closing I Won’t Quit makes the showmanship of the opening seem a long way away. Here it’s just acoustic guitar and pedal steel that offer accompaniment, his voice taking up residence in your inner ear – cue applause and calls for more.

Golden-voiced and with songs to match