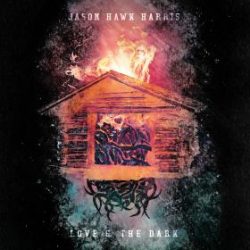 Hailing from Houston, and now LA based, this is the first full length release from Jason Hawk Harris, and some first release it is. Though clearly showing its writers’ country and alt-country roots, a wide range of influences outside this core is evident in this exceptionally well produced album, with compelling vocals from Harris.

Harris brings a full country artists back story to this album: his mother died from complications of alcoholism; his father went bankrupt after being sued by the King of Morocco; his sister was diagnosed with multiple sclerosis and gave birth to a premature son with cerebral palsy; and—his label tells us—he got side-tracked by his own vices. But while there are personal stories in or reflected in these songs—for example the powerful ‘Phantom Limb’ a testament to the loss of his mother—it is never at the cost of retaining universal resonance, or presenting strong songs with great and varied arrangements.

His musical journey spans early years in classical music composition, which can be heard in the almost orchestral productions of songs such as ‘The Smoke and the Stars’, through a period performing and writing with The Show Ponies, to this return to his country roots, informed by a varied diet of pop and rock.

His compositions feature literate and intelligent lyrics, reminiscent at times of Nick Lowe, and whose production style can be felt in the punk energy of ‘I’m Afraid’, and the post punk/rockabilly leanings of another stand out track, ‘Red Room Blues’, which has echoes also of Elvis Costello, especially in the excellent Steve Nieve style keys.

The album has a strong identity, led by Harris’s strong vocals, with pedal steel and slide guitar and keys at the fore, but with a variety of styles and excellent musicianship and production, by Andy Freeman, which maintains interest throughout.

Harris’ vocals, and lyrics, invite comparison with Jason Isbell, which on the strength of this first album is justified.