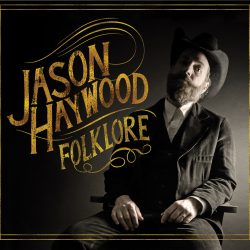 In something of a departure for the Canadian singer-songwriter, the latest album by Jason Haywood is a dark, ambitious and as big in scope as the land it came from. The opening (The Ballad of Clara Leigh) is vast and atmospheric with the narrator asking if the howl he can hear across the frozen wastes is the wind or the ghost of his murdered love and things don’t much fluffier from here. The music itself, a creative blend of folk styles that moves away from his previous leanings towards a more Country-based sound, is much of what you’d expect from an record entitled Folklore and there is more than one reference to the British folk music by which it’s influenced.

There’s still a strong pull of Americana in the form of the instrumentation, for those that miss the banjos but the hallmark of this brilliantly written collection of songs is the stories on which they are based. It just cries out for another listen so that the stories are clear in your head, so compelling is each narrative. This is the work of a great story-teller.  particularly paints a picture that is exactly the stuff of great folklore and for those that like narrative-driven folk will have hours of imagination driven rapture in the exquisitely told tales.

This is a superb album with enough variety to challenge the most ardent of fans. It shows enough willingness to confront the limitations of style whilst remaining anchored to roots in a very pleasing way. It is restrained enough for a casual listen whilst containing the depth required of an album that entitles itself (in more ways than one) to claim links to an old and deep tradition. It’s still a genre record though and if you don’t like this sort of folk then there may not be enough to keep you entertained and whilst lively in places, it’s not the go-to album for your next party.