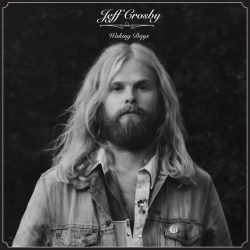 Jeff Crosby though still young has just enough living under his belt to qualify as a seasoned performer, and a voice dripping in character with the songs to match. His worth as a songwriter if weighed in gold would take more than one man to carry. “Carved In Sandstone” speaks of how Tennessee got the best of him. Restlessly, he breezes through a succession of vividly painted scenes likened to those from the silver screen, or an independent cross-country road movie. Most notably he walks around with “The Homeless And The Dreamers”, where propelled by an urgent rhythm it crashes through fences without excess force. The track is addictive as that first cup of morning coffee. Returning to the less musically driven Crosby kills it stone dead with the beautiful “Red, White & Blue”. He revisits the benchmark and style on the impressive “Emily”. In truth he veers little in quality during the record.

Produced by John Gilbertson, Waking Days was recorded at Bedrock Studios in Los Angeles and in Nashville. His band, The Refugees provide excellent backing. A crucial sound is performed by the boys, and with “The Only One I Need” warmed near equally in pedal steel and piano the benchmark of “Red, White & Blue” is matched. Studious and carefully written Crosby comes up with one fine piece of songwriting after another.

More high-powered fare is heard on “What’s Normal Now”. Though solid and steady I gravitate with greater fervour towards “Waking Days” as his music veers more towards that of another fine performer John Fullbright (some tribute). I love the worn, lets toughen it out feel of his vocals. Even though the title-track is listed as the tenth and final track, the listener has two more highly recommended songs in bonus tracks “This Old Town” (restless) and “Oh, Love, Oh Lord” (an epic affair, it also has a tempting acoustic piece tagged on to it).