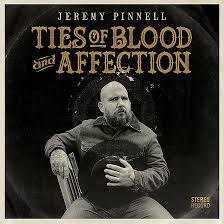 A Northern Kentucky singer-songwriter, Jeremy Pinnell builds on the stark, soul-searching of his much acclaimed debut ‘OH/KY’ with a fuller sound and more relaxed delivery on this his second album. This work is still rooted in the classic country tropes of his debut but the songs feel more developed and rooted in the country tradition of the seventies rather than the fifties. The strong, classic voice tells tales of a working life and family all the while punctuated by some wonderfully sympathetic lap steel.

As the album continues this reviewer is reminded why the straight-ahead Nashville sound has always been an elusive delight. Each track begins to morph into the next as the songs march into each other with their jaunty waltztime steps.

This is an album for proper country fans . All the boxes are ticked and ticked very well: Great production and playing. A killer voice and strong genre songwriting. There is no crossover track here but I suspect that Pinnell is not looking for crossover and that’s fine too. It’s a great country album.