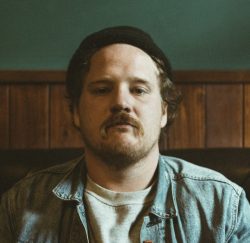 Settling into a short run of European shows, I managed to catch a quick chat with Michael Nau, the Maryland singer-songwriter who, on the back of a new album and most recently a 7-track EP, makes a short visit to these shores this month. Following 2016’s Mowing, a sonically captivating piece of work where the songs, stripped and bare at first gradually colour whilst bathing in a hazy, captivating psychedelic hue, Nau has followed it up with ‘Some Twist’, an equally beguiling record – both in sound and content. I ask Nau about the recording process as, to my ears, the overall sound and feel of these records has as much importance as the songs in the whole process.

“All the records, so far, are made up of songs that were recorded in different ways,” He notes. “The general goal is to make it sound as good as we can. Sometimes the setup is better than others. But once it’s all put together in the end, & these things are sitting side by side, there does seem to be a sonic thread that goes through the whole thing. It’s not all that intentional.  I use the recording tools to write the songs a lot of time – so, a lot of that happens simultaneously, but then they’re sometimes re-recorded from the demo. If there’s ever an idea at the start, it changes. There are just too many roads to take along the way there, for better or worse. I like the surprise. ”

Whereas ‘Mowing’ was essentially a collection of song ideas that grew and developed in the studio, Some Twist feels a more complete album. Awash with echoes of Nilsson and early 70’s summer pop it’s a record that sits very comfortably on the ears. There’s a sense of playfulness, a cheeky confidence if you will there too, an ease in which Nau can interpret the song without appearing to ever raise a sweat.  The Load EP features seven tracks that initially failed to make the cut for the album but which Nau was reluctant to leave on the cutting room floor.

“Those songs were always kind of in the mix,” He points out. “They were just at the back of the line. I don’t know why. I’m proud of those songs. I just didn’t want them to get lost. For whatever reason, they felt like outliers at the time and weren’t included in the mixing sessions. You can hear some pieces, a few lines here and there that worked their way into that record in a different form.”

Influences don’t appear straight away when listening to these records but gradually show themselves. The aforementioned Nilsson, some Bill Callaghan touches here and there, Lambchop even, I wonder where he finds his inspiration.

“I listen to whatever I can, and try to learn from it, current & past.” Notes Nau. “There have been a few important bands at different seasons. It’s been all over the place. I didn’t grow up on ‘cool’ music. There’re a lot of the household names that I didn’t discover till later in life. A few records really stirred me in high school – Jawbreaker “24 Hr. Revenge Therapy”, Neutral Milk Hotel “Aeroplane” Cass McCombs “A” – all that stuff lead to the next thing, and so on. Listening to records front to back, over and over. I’ve been listening to that TL Barrett record that came out on Light In The Attic since it was released… that’s been my go-to.”

So what we can expect from the upcoming shows, especially given he will be bringing a portable lathe with him to the shows in order to cut special one-off tracks to 7” there and then. I’m guessing these won’t be run of the mill occasions.

“It’s gonna be a trio band at these shows,” Nau points out. “It’s the only way these tours are possible, really. So we aim to cover as much ground as we can, without a whole lot going on stage.  Mike Dixon from PIAPTK is bringing a portable lathe & cutting records after the shows. He came to me with the idea, and I’m glad to be a part. This is the first time, so I think we’ll have a bit to figure out as we’re going. It’s a pretty cool way to document this trip, and see what it turns into.”