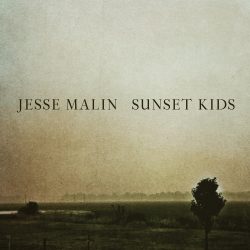 Next time you feel the need to reach for a ‘what-you-see-is-what-you-get does-exactly-what-is-says-on-the-tin’ record you could, in all honesty not do a lot better than Jesse Malin’s new album ‘Sunset Kids’. Don’t come knocking if you want surprises, but feel free to spin if you want the kind of solid rootsy rock ‘n’. roll that’s been round the block, seen it all and still knows damn well how to please. This is a great album of 14 hugely enjoyable songs.

Malin is assiduous in his collaborations here, balancing his alter-egos beautifully – letting his punk predilections run through with veins of classic rock and country. The record is produced by Lucinda Williams who co-write and joins Malin on ‘Room 13’. The story goes that the idea of Williams producing the record started when she invited him to see her open for what turned out to be Tom Petty and the Heartbreakers’ final concert. The two share a love of Lou Reed and the Stones and goodness me have they channelled that here. Take the opening track ‘Meet Me At The End Of The World Again’, it saunters in on a rolling Bruce Hornsby piano figure before hefting a bullish vocal akin to Alabama 3 and ‘Woke up This Morning’, it then lifts to the kind of chorus that has brought Sheryl Crow a career of top 40 hits. It is magnificent earworm stuff that is hard to resist. So maybe it is a little unfair to describe these songs as an amalgam of other songs and artists, but in a world when very little is new there is a pleasure in appreciating how the tunes on this record are hewn from the rock of history with such a craftsman’s chiselling. Next up, the pace alters for ‘Room 13’, one of two Williams co-writes. It opens the door to a more country influence with reverb-soaked, shimmering guitar of the kind that made ‘Unknown Legend’ a classic. And those influences keep on bursting through and compounding the pleasure: ‘Promises’ is like a Stones/Young collaboration- imagine ‘Waiting On A Friend’ sung by Neil Young.

‘Strangers and Thieves’ is co-written with, and, features a contribution by, Green Day’s Billie Joe Armstrong leveraging Malin’s punk past. The harmony of the punk/roots is evident on ‘Shane’ where the loop is deliciously closed. Malin and Williams offer a tender ballad to one of Malin’s heroes, the massively talented and conflicted Shane MacGowan of The Pogues. “They pulled you out of your hospital bed to take you down to the show” sings Malin and Williams reflecting on the cognitive demands we as an audience press on artists, but Shane is assured that “everybody sends their love”. Deep in the song is a reference to “Playing Death or Glory”, not a MacGowan song of course but, here is the thing, obsessive hoarders of free magazine CDs will remember that back in 2003 Uncut magazine put out two CDs of tributes to the Clash, and yes, on volume two there is Malin delivering a quite wonderful piano-based version of the very same song. (Don’t worry if a trip to the loft beckons to check that out – YouTube can come to the rescue).

Between these gems are yet more sparkling treasures –‘Chemical Heart’ deserves a mention for name-checking Bernie Taupin.  Malin fans will spot three songs, including ‘Revelations’ that have been aired before on other projects. No matter – they all fit together here into a triumph a record which must rank among the best of Malin’s career and among the best of this year. Check this one out for sure.

Right up there with Malin's best work, 'Sunset Kids' is a brilliant album of future classics