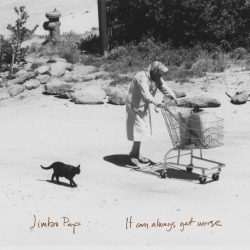 The debut album from Jimbo Pap occupies the border territory between outright country and indie rock. Gram Parsons is name-checked in the first song and somewhere along the way, Wilco passes through the mix. Jimbo Pap went from a solo project to a regular band with the three core members providing the name (Jim, Bo and Pap). They bring a fine pedigree to the band and their respective backgrounds are evidenced in the overall style. The sound typically juxtaposes wry humour with a jaunty up-tempo country musical composition.

The net effect is a rather attractive album that grows over repeated listens until you find yourself welcoming each track with warm familiarity. This is a comfortable and entertaining space, without overly stretching the boundaries that the band is almost certainly capable of.

‘Submission (Nice Pants)’ frames their intention admirably. It immediately combines self-deprecating lyrics overlying a more traditional keyboard and country slide guitar sound “We’re Jimbo Pap and you could call us a band but it’s a shell corporation…” This sets the scene for the mixture of traditional and modern elements that form the backbone of this album.

‘Long Kiss Goodbye’ is arguably the best song on the album, while being simultaneously the least characteristic of the overall style. It has a much more alt-country rock sound with a looser less polished mix. The song utilises direct expression about rejection which feels natural and genuine and presumably resonates with the writer’s personal experience.

‘String Of Pearls’ and ‘Another Ticket On the Windshield’ occupy the compositional heartland. Current issues are readily expressed within a country-rock sound without ever resorting to melancholy. The album closes with ‘Someone’s Gonna Love Me Again’ an almost traditional rock number which retains the same degree of good humour and optimism that is evident throughout.

Jimbo Pap’s stated goal was to make a fun record, the kind of thing you’d put on during a long road trip with friends. In this they have clearly succeeded – this is an album you can easily imagine in that context.  It may not be an album you feel impelled to find a private space to critically absorb on your own, but not every album needs to do that.

‘It can always get worse’ but it seems highly unlikely. A solid modern country rock debut.