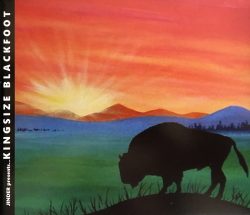 This is Phil Dewhurst (Jinder)’s 10th album. He lives and works in Dorset, and by his own words has played, sung, recorded, engineered, produced and mastered this album himself at a studio in that county. The name of the album “Kingsize Blackfoot” has been adopted for this project to honour Jinder’s / Phil’s direct connection to Native American Blackfoot Sioux Roots, and also as a comment on his stature (6’7’’). Note also the classic album cover: a buffalo on the plains, with the sun rising.

The first track “Great Plains” sets the scene perfectly. From quietness, there is a build to a short, simple and repeated guitar motif with the beating of sticks, and finally, Native American chanting in the background, holding you. A very special start. On track two, there is Jinder again, this time on slide. “Walking down by the water/ Where the worlds collide.” With a heart beat in the background and references to being “close to breakdown” and “waiting for my woman.” All this, with perfect playing, the album is well set. The initial theme of places continues with “In the Pines.” Here is one of the ultimate traditional roots songs. Also titled, ‘Where Did You Sleep Last night?” it has been sung, for instance, by Dock Walsh, Leadbelly, The Louvin Brothers and Billy Bragg. Phil’s thoughtful arrangement and singing are impressive.

Jinder’s version of Townes van Zandt’s “White Freightliner Blues” compares very favourably with Townes’ own version and stands proudly alongside the original, quasi-orchestral recording. So it is with all the tracks: quality of performance and the natural tendency of all the songs, whether traditional or newly written, to stand properly in a roots repertoire.   For instance, Jinder’s assured singing of “Brother Can You Spare a Dime?”  reunites the listener with an important song, while “Woke Up This Morning,” written by Jinder is able to present the song as part of a traditional set. In this track his resonator playing is impressive. Likewise, his version of “Automobile Blues” is memorable, with the musical ability to add another dimension to the Lightning Hopkins original. The last track is a live recording and effectively epitomises what Jinder’s music is about.

All in all, here and throughout the album he is paying homage to the musicians who have influenced him: Townes van Zandt, Robert Johnson and Hank Williams. It’s just Jinder and his guitar here, and the realisation that “Sooner or later, there is a path you must choose.” The path involves “coming back to the blues” and this is the lasting appeal of the record.

An honest and moving British homage to American roots music.