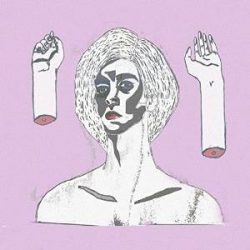 o (Ben Webb) dabbles in the kind of outsider folk that at one time would have been snared by the anti-folk brigade; it’s a mix of Lou Barlow (in Sebadoh and Sentridoh low-fi obscured by the process mode) the naivety of Daniel Johnson, some Viking Moses, R Stevie Moore and heap of Danielson’s off-kilter playfulness. He’s gathered a host of collaborators to provide or add vocals, or produce, his own voice is a pronounced witter and when it is stirred into an obfuscated fog of clanging instruments – it can be rather hard going.

There are moments of coherence and fun, ‘Waiting for P to Have a Vision’ would be an enormous hit if we lived through the looking glass. It finely balances the weird with the near wonderful, wrapping a nugget of sense in a big bow of nonsense. ‘With Birds’ smuggles in some genuine melancholy and he shows rare constraint, holding back on the willful weirdness allowing for a genuine connection. ‘I Am I Am the World’s Oldest Man’ with guest vocals from Malcolm Middleton picks out a path between the avant-garde and pop music – it simmers and shimmers, has a recognisable chorus and the clarity of a David Lynch film.

‘Your Baby’ starts like a Sentridoh cassette, with plaintive acoustic guitar that soon starts to unravel as electronics bubble away, backing vocals thickens the song, a storm gathers gradually replacing the guitar until it’s just the hum of machinery, alienation complete, there are a few bars of violin, then all fades, it’s a song that deconstructs itself. Elsewhere the experiments don’t work as well but then with music like this, pleasure isn’t the primary driving force, it is music of ideas, of concepts and just occasionally it allows in some humour and humanity which rescues it from the art ghetto.