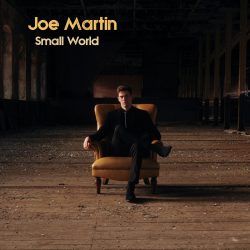 Youthful Red Rose native Joe Martin has crossed the Pennines to begin his musical adventures from a West Yorkshire base, physically at least. Spiritually he’s rooted in the 1970s American singer-songwriter world of Don McLean, Jackson Browne and James Taylor. These songs amply demonstrate that he’s worthy of a seat at their high table.

Small World boasts only five songs but that means there’s absolutely no waste. They are all strong cuts with little more than voice and acoustic guitar n display. Silent Vow, the opening track, sets the tone of love’s labour’s lost and won. Denver tells of the solo journey that Martin must take, and the places he can no longer visit, in pursuit of happiness and peace of mind. Killing Me Slowly is the relationship that can’t quite be escaped from, despite the damage being done. Who You Really Are closes the EP; another sad, wistful lament upon love fading away over time and familiarity. Joe Martin’s not breaking any new ground here, but he shows a masterful understanding of his genre and significant song writing skill. Perhaps he could sharpen up a little more by avoiding a few lyrical clichés dropped now and again I his lyrics. However, when mediocre corporate shills such as Ed Sheeran can be world-wide stars, Joe Martin exemplifies what genuine talent sounds like.

A cut above the plethora of acoustic singer-songwriters. Joe Martin shows an abundance of promise.