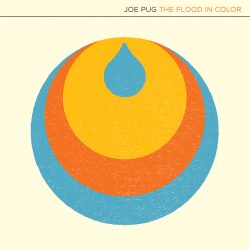 In what is turning into a vintage year for quiet reflective music we now have Joe Pug’s new album ‘The Flood In Color‘. Don’t be fooled by the sleeve which looks like something from a 1970’s Blue Note album, this is sepia-tinted acoustic music. What Crosby Stills and Nash would have called wooden music. With only one song coming in over three minutes and several closer to two, this is an album of vignettes. Brief stories backed mostly by acoustic guitar and harmonica with splashes of colour from strings, Hammond organ and accordion.

By the time of the fourth song on the album, ‘Long Midnight‘, an electric guitar being picked to provide a bass line has joined in. This song fades out at two minutes fourteen seconds and could easily have gone on longer. Next up one of the better songs ‘Blues Came Down‘. This reaches a conclusion only 11 seconds longer than the previous track, so why fade ‘Long Midnight?’ Pug claims John Hiatt and John Prine as influences, but there is Dylan in there too. The short song structure means that as soon as you are getting comfy with a piece it is gone. Longest at 3.03 is ‘After Curfew‘ where the electric guitar returns to provide a distant lonesome feel to the music. ‘The Stranger I’ve Been‘ and ‘Exit‘ are the strongest songs here, but that doesn’t mean there are many weak songs. On the contrary, after a few plays the words start to seep out of the music. “You could have had a wife, instead you made a name. The monuments you built look smaller by the day”, he sings in the autobiographical closer ‘Empty Hands and Broad Shoulders‘.

It seems that it took four years to complete this stripped-down minimalist beauty of an album. Time well spent.