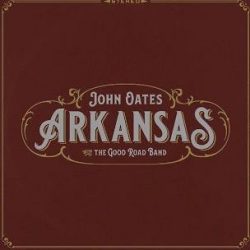 As Hall and Oates wind down from their latest supersize tour of America’s arenas, John Oates has indulged in a novel form of relaxation – he’s formed a band and gone back into the studio! Actually, unable to fully resist the lavish excess that accompanies the day job,  it’s more of a blues supergroup. Guthrie Trapp (electric guitar), Sam Bush (mandolin), Russ Pahl (pedal steel), Max Smith (cello), Steve Mackey (bass) and Josh Day (drums) completing the all-star cast in Oates’ tribute to one of his great influences – Mississippi John Hurt.

That’s not to say that he’s opted for the slick, commercial production of an H&O record, in fact, quite the opposite. ‘Arkansas’ is recorded in the old tradition, live onto analogue tape. With this in mind, it’s advisable to get hold of the vinyl version to fully appreciate the experience. It gives the listener the eerie feeling of hearing technically accomplished contemporary musicians playing with present-day technology, recorded in a time-honoured way.

As mentioned, the project started out as a solo thing, dedicated to Oates’ blues hero but soon veered off into a more inclusive ‘band’ orientated affair, although it’s very much Oates’ baby. The inspiration behind the album slowly spreads over what to many fans of H&O is a bluesy blank canvas, having known only the stadium prog rock of the world’s best selling musical duo. But Oates has roots in Arkansas and once stood in a field of cotton on the banks of the Mississippi and declared it the most beautiful moment he’d ever experienced.

The title track and lead single was the result which, along with ‘Dig Back Deep’ are Oates’ songwriting credits here. When backed by the Good Road Band this is blues-based Americana at its finest –  boot-scootin’, wind-in-your-hair rock ‘n’ roll played out live in your living room. Certainly it worked out, putting the twist on the Hurt vibe. The rest of the album is made up of covers from a myriad of sources right back to Emmett Miller’s 1924 recording of ‘Anytime’ and Oates likes to think of it as a kind of museum of folk music. But the Mississippi John Hurt influence is everywhere; if it ain’t by him it’s about him or dedicated to him, only don’t be fooled by the croaky voice and the bluesy facade, especially with The Good Road Band on shift. In Oates’ own words “It’s like Dixieland, dipped in bluegrass, and salted with Delta blues.”.

And now for something completely different…