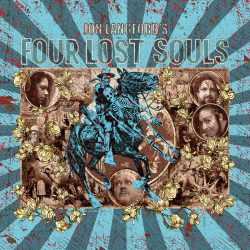 Jon Langford has an interesting and genre-hopping career as founding member of punk icons, the Mekons (celebrating their 40th anniversary this year), as well as alt-country pioneers, the Waco Brothers. Music aside, he’s also a celebrated artist, his paintings and prints of many illustrious music heroes having been exhibited all over the world, including the Country Music Hall of Fame.

For this album, Langford had the foresight to surround himself with musicians and singers of real quality, including legendary members of the Muscle Shoals recording crew – David Hood and Randy McCormack – along with Chicago musician John Szymanski. There are guest appearances from Tomi Lunsford – proper Nashville royalty – who’s recorded Porter Wagoner and Delbert McClinton, and Will McFarlane, who spent 6 years playing guitar with Bonnie Raitt. To cap it all, Jon Langford was invited out to Alabama to record the album by no less than Elvis Presley’s former bass player, Norbert Putnam, who also produced the album.

Whilst all the building blocks for a great record are firmly in place, then, why is it that the finished article feels lacking? The answer surely is that the album took all of four days to record, and whilst albums such as ‘Please Please Me’ by the Beatles and Led Zeppelin’s debut prove that a degree of spontaneity matched to creativity can prove a real asset when the circumstances are propitious, on this record it just turns into a number of songs which sound a bit half-baked.

‘Four Lost Souls’ kicks off with a gentle, melancholy country rock duet in ‘Poor Valley Radio,’ the song underpinned by weeping pedal steel and spare piano. The twangy guitars of its follow up, the faster paced ‘Natchez Trace,’ are somewhat reminiscent of Shack circa the ‘HMS Fable’ period.

As the album was written and recorded in the immediate aftermath of the Trump inauguration, the influence of the election and its aftermath on a number of these songs – including this one – isn’t hard to find. Ostensibly, about a stretch of highway which extends the roughly 440 miles from Natchez, Mississippi to Nashville, it’s really a song about the racial divide and the legacy of the Civil War that still exists at the heart of America – also the subject matter for the song, ‘In Oxford Mississippi.’

One of the strongest tracks on the album, ‘Fish Out of Water,’ is another socio-political number, of which Langford has commented: “America feels more broken and divided than ever and democracy has become a creaking impotent institution that can barely justify its existence… We need some air so we can breathe but they’re too busy poisoning the water … Trickle down poison economics!”

Langford has the sense to share the vocal duties around on this album, his own Welsh intonations lacking a certain degree of character, and the strongest tracks are those where his backup singers feature most prominently on the thirteen songs that make up the record – including the gospel-infused ‘I Thought He Was Dead.’

Ultimately, while this is a laudable effort at fusing a number of musical genres, the whole doesn’t prove to be as much as the sum of its parts, and few of the songs lodge long in the memory. Further time spent in crafting them might have made the difference between this being a classic rather than the also ran it’s proven to be.

A valiant attempt to create a Southern stew of musical styles, but one which ultimately fails to match the quality of its ingredients.