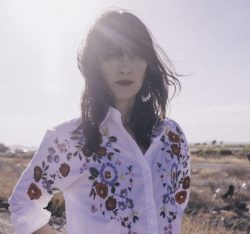 Juanita Stein has just released her debut solo album, ‘America’, on Nude Records. Stein, who is already known as the singer-songwriter with Howling Bells, recorded the album with producer Gus Seyffert (Beck, Ryan Adams) in Los Angeles. Following recent tours with Michael Kiwanuka and Richard Hawley, Stein will follow a North American tour with UK dates over the summer.

Can you tell us about yourself? Where you’re from and what you’ve been up to over the past few years?
I’m from Sydney, Australia. I moved to the UK some years ago with my band Howling Bells and toured/recorded consistently for the last while. Now I find myself based in Brighton with my family, I recently recorded my debut solo record in Los Angeles with Gus Seyffert and have been playing solo shows both here in the UK/Europe as well as the US.

How would you describe your music?
Dusty is a word that comes up often. Dusty and melodic. I’m drawn to things that are kind of grainy and aged, things that have a soul. So I strive for my music to sound that way.

Can you tell us a little bit about your influences?
Musically, sweeping melodies and grand lyrical gestures influence me. I adore soundtracks, John Barry is an obvious one, but he nails it. The Midnight Cowboy Theme and You Only Live Twice are important songs. Films inspire me as they tend to capture an ambience I find really satisfying. Art, beautiful dark, poignant art inspires me like Kandinsky and Chagall.

What are you currently promoting?
My debut album, titled “America”, recorded funnily enough, in America.

Have you got a particular song you’ve done that you’re particularly proud of, one that might define you?
On this record I feel like the title track took on a strong identity, also the song I’ll Cry feels good to me, as in captures the right spirit.

What are you currently listening to?
The new albums by Courtney Marie Andrews, Nikki Lane, Ryan Adams, Kendrick Lamar, Resistance Radio by Dangermouse and Cass McCombs.

And your favourite album of all time, the one you couldn’t do without?
Probably “Electric Ladyland” – Jimi Hendrix

What are your hopes for your future career?
Longevity, happiness.

If money were no object what would be your dream project?
A sprawling estate somewhere near a surfing beach, with a state of the art recording studio/venue/art space for kids and hell, why not, an animal shelter.

What’s the best thing about being a musician?
The ability to express yourself freely.

And the worst?
The inconsistency.

Finally, have you anything you’d like to say to the readers of Americana UK?
Come check out a show and say hey, I’ll be chatting at the merch desk after 😉