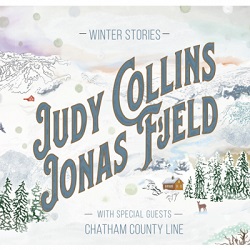 The exemplary Judy Collins has not let the grass grow under her feet – having completed an album and a tour with Stephen Stills, and then her own solo touring schedule, she has still found time to get back into the studio for a winter-themed album in collaboration with Norwegian singer Jonas Fjeld. Anticipation to hear this new release was only increased when it was casually mentioned that the pair had Chatham County Line as their backing band – it’s a natural grouping since Fjeld has previously recorded three of his own albums with the band. It sounds like it could be a dream of an album – and it is. Be warned, if you choose to read on you’ll encounter superlatives.

As the title suggests the album does have an overarching theme of Winter, with Jonas Fjeld taking a leading hand in the selection. Judy Collins brings her crystal clear vocals to the Christmas time setting of Joni Mitchell’s ‘River‘ – with gentle accompaniment from Chatham County Line it’s as sad as can be, with soft mandolin offsetting those stinging words of regret: “I’m so hard to handle I’m selfish and I’m sad / I’ve gone and lost the best baby that I ever had“. It’s hard to imagine anyone else but Judy Collins making such a fine version of a song whose original perfection makes it almost sacrosanct. Jonas Fjeld reworks his own ‘Angels in the Snow‘, initially singing in his native Norwegian before his gruff weather-beaten voice gives way to Collins’ translation before the pair magically intertwine with somehow the hard-worn deeper voice and the gossamer delicate voice melding into something that’s even more beautiful.

Of all the wintry music though it’s the full recording of Judy Collins’ ‘The Blizzard‘ – which has only previously been heard at full length in live performances – that is the standout. It is one of her most stunningly effective songs – drifting on piano that floats around like the falling snow descending on a Colorado mountain road as strangers get caught at a diner whilst a blizzard descends. It’s a strange otherworldly situation and confidences are exchanged as the night continues even though “I don’t talk to strangers / I’m a private sort of person / but a blizzard is a blizzard“. There’s love, and consolation, and drinking and an eventual parting captured over a magical six minutes

Breaking out of the wintry theme is a take on Jimmy Webb’s ‘Highwayman‘, with Judy Collins’ vocals soaring ethereally on this paean to reincarnation. The interplay of piano and the chugging bluegrass of Chatham County Line shines a new light on this familiar song. There’s a wonderful elegance to Collins’ phrasing of lines such as “or I may simply be a single drop of rain but I will remain” which allow for no room to disagree – Judy Collins has stated that she will exist eternally, and that’s just the way it’s going to be. On ‘Bury Me With My Guitar On’ Chatham County Line get to rip a little more, as the song bounces along at a Bluegrass pelt it mythologises the guitar toting troubadour alongside western heroes and villains, and as verses are traded around the singers and the band Judy Collins, without any self-pity and with a deal of humour in her voice, snatches the most appropriate one, “picture me up on the stage / never one to act my age / we all know the lightning strikes / maybe tomorrow maybe tonight“.

‘Winter Stories‘ is an album that brings out the best of all participants – Judy Collins is in wonderful voice, Jonas Fjeld offers a dramatic counterpoint with the right edge of gruffness whilst the inspired combination of the duo with Chatham County Line adds a real connection back into Judy Collins’ early folk routes. It can’t really be said more plainly that Judy Collins is one of those singers that needs to be in wonderful voice and with an inspired selection of songs to sing when they record – and that’s very much the case with ‘Winter Stories‘.  The only downside to this album is that it was recorded in just three days – with another day or two they could perhaps have expanded out to a double the length release. On the other hand it’s worth all the participants noting that there are three other seasons to the year – just a thought Judy.

The short summary? Judy Collins, Jonas Fjeld and Chatham County Line have made a sublime album