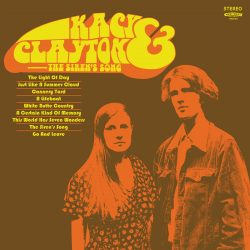 When an album cover brings to mind the swirling pop art of the hippy revolution of the 60s it creates an expectation of what might be expected from the music contained within. Hailing as they do from rural Canada, cousins Kacy Anderson and Clayton Linthicum (ex Deep Dark Woods) have brought swirling guitars and haunting vocals to add to their obvious country and folk influences. The result is an album with definite nods to that generation defining era.

Adding Mike Silverman on drums/percussion with Shuyler Jansen’s bass to compliment the talents of Linthicum’s multi-instrumental skills and the delights of Anderson’s evocative vocals, the duo entrusted the album to the production of Jeff Tweedy of Wilco fame. Recorded at Wilco’s in-house studio in Chicago the result is an album that adds bite and depth to the mix without ever undermining what lies at the heart of Kacy & Clayton’s music.

If the overall sound on show here is upbeat and optimistic the songs themselves often comprise bittersweet and heartfelt lyrics of regret, reflection and melancholy. ‘A Lifeboat’, one of the more low-key affairs on offer with pedal steel a stunning accompaniment to Anderson’s haunting vocals, gives us the opening lines ‘If envy was tequila and jealousy strong beer, we could throw a party that would last throughout the year.’

With the exception of one adaptation of a traditional song the songs are all written by Anderson and Linthicum and the pair demonstrate a maturity in song writing that belies their relatively tender years. Intelligent and thought-provoking lyrics paired with evocative vocals and high-quality musicianship will always be a potent mix and so it is proves here.

In Greek mythology the sirens were mystical creatures whose magnetic voices and enchanting songs lured enraptured sailors to their doom. The title song pays homage to that legend whilst also allowing thoughts to drift to how this album could have the same effect on the unsuspecting listener. The Siren’s Song would not be unique in that the more plays it gets the more it seeps into the musical bloodstream but that doesn’t make it any less of a truism.