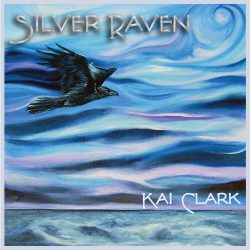 There is no middle ground with tribute albums. They turn out either as a haphazard collection of fan musings with a lot of hits and even more misses, or as well-thought-out collected reflections on important genres. Too many of the former around, too little like the ones late great Hal Willner made. Essentially, making a good tribute album involves a well-thought-out idea, careful selection, and a true emotional element that treats the music that is being covered or re-imagined with respect and care.

All of these elements are needed if you want to make a tribute to such an Americana legend as is Gene Clark. To that effect, ‘Full Circle – A Tribute to Gene Clark’ certainly ranks among the better tribute albums. So, how does ‘Silver Raven,’ a tribute to late Gene by his son Kai and his band rank in that respect?

The first hurdle Kai Clark had to surmount here was such a mercurial shadow his father has cast. Gene’s catalogue is so vast and studded with some of the best Americana, rock, country, and folk music around. The second is the personal and emotional element of how do you treat such great music without any pitfalls and coming out with a cohesive set of songs.

Through all this, Kai Clark and his ‘Silver Raven’ come through with almost no blemishes. It took Kai more than 10 years into his musical career to attempt this tribute venture. “People have been asking me for years when I would record an album of my father’s music,” he said. “I think it took some maturity and deep reflection on my part just to understand the music and feel like I was doing a proper tribute to him and his legacy.”

And it shows. Kai’s approach was to try to stick to the originals as he hears them and at the same time give them a personal element. Combining his band with some musicians that worked with his father (Byron Berline, Carla Olson and Henry Diltz) and his voice that has both the vocal and emotional timbre of his father’s, Kai was able to come up with some quite exquisite versions of songs from Gene’s opus, including even some that he didn’t even write (‘Mr. Tambourine Man’ for example) but are significant for the artist’s career.

While many would question Kai Clark’s choice of material on ‘Silver Raven,’ after all, it is his choice and vision of his father’s music, and he comes through it shining. His father would be proud of him.

An excellent tribute to an Americana legend by his son