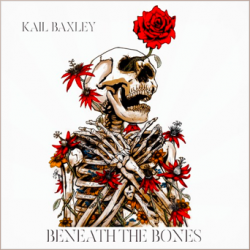 “I’ve been running for such a long time”, sings KaiL Baxley on ‘Beneath the Bones’, the title track from his latest album. Indeed, it seems that he has, having lived a life that is almost filmic; full of highs and lows, strange characters and, finally, redemption. When he was a child his father ran out on him and his mother went to prison. He was raised by his grandfather. He came to know James Brown as a child as Brown was incarcerated in the same prison as his mother. They used to sing in the prison church. He learned guitar from a Haitian refugee in his hometown. He was a golden glove boxer who missed out on the Olympics due to a brush with the law. Both his parents died from drug overdoses and he made money digging graves at the local cemetery. He headed to LA with nothing but the shirt on his back and his guitar, living in an RV for two years whilst saving to record his first record. That record, ‘Heat Stroke / The  Wind and The War’ was nominated for album of the year by NPR.

Baxley is certainly on the rise, and this, his third album, is his most ambitious to date, as he continues to develop his sound and grow as an artist. Having suffered his share of hardships, Baxley came to music as a way to move past pain. Indeed, in interviews, Baxley seems almost reluctant to talk about his past, perhaps understandably, and you get this impression that rather than dine out on his personal history he would rather let the music do the talking. The music is very much capable of this, and there is an intensity and depth of feeling, no doubt rooted in his tumultuous past, which really comes across on the record, which is shot full of heart, soul, and honesty.

The sound itself builds on Baxley’s previous record. It is an engaging mix of gospel, soul, and R&B, driven along by a traditional singer-songwriter’s sound and focus. Recorded at the late Elliot Smith’s New Monkey Studio, HAS Studios in Charleston, SC and United Studios in Los Angeles, Baxley produced the record himself. He clearly has some chops in this area as the sound is wonderful – warm and rich – it has the familiarity of your favourite old soul record. There are some great sounding guitars, interesting percussion work, and accomplished songwriting from Baxley. A particular highlight is the gospel-inspired backing vocals which appear on many of the tracks – they give the whole thing depth and emotional resonance and really tie the sound together wonderfully.

All in all, this is a strong record from an interesting artist who is clearly on the up, and clearly knows what he is going in front of a microphone as well as behind a mixing desk. The record doesn’t jump out and grab you, but it has a brooding, moody substance which cannot be denied and will hopefully be unearthed and developed more by Baxley on future records.

Americana blended with gospel and soul from a songwriter with a story to tell. Brooding, honest, engaging