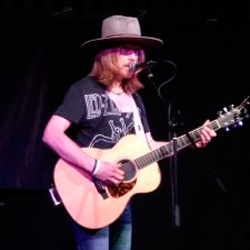 What a great space the Bedford is for a singer songwriter to perform in, shaped as it is “in the round” like the Shakespearean Globe. Despite a sparsely attended London showcase, Kenny Foster treated a quietly enthusiastic audience to an acoustic selection of eight of his songs, seven of them drawn from his recently released debut album ‘Deep Cuts.’

Wearing a ripped at the neckline Led Zeppelin 1977 t-shirt and a kick-ass country couture hat over his long blond hair, the man engaged the audience with fervour. Only once did he abandon his own songs to play a Garth Brooks cover,  ‘Callin’ Baton Rouge.’ His apparent hesitancy at playing this was probably warranted given the limited time available to him, but it didn’t detract from passionate renditions of many of his own numbers, the particular stand out being ‘Hometown,’ a song about how in 2011 a Force 5 level tornado flattened around 70% of his childhood hometown, Joplin, Missouri. Pre song he explained how his parents had only survived by hunkering down in a crawl space for the duration of the storm. Such a heartfelt tune could so easily be played quite readily around the States right now as a salutary reminder of the devastating impact of mother nature. But what endures from this tune, as with many of Kenny Foster’s others, is his sense of resilience in the face of adversity.  In the final song of the evening – and lead single from the ‘Deep Cuts’ album – ‘Stand,’ he sings “When I fall, I still believe/ When you think I can’t get back up again / Is where I stand.” The song starts slowly and builds to a rousing crescendo, almost spiritual in both sound and intent.

Based in Nashville since his university days, Foster clearly has something of a love-hate relationship with the city, affording as it does opportunities but in an increasingly crowded marketplace. Yes, he has all the swagger of someone just off the Nashville merry-go-round, but whether with his fairly mainstream country sound, he’s able to sufficiently establish a USP remains to be seen.

An engaging and humble performer, Kenny eagerly sought out members of the audience afterwards and said he hopes to return to the UK next March. It’s a measure of his own personal integrity that all the proceeds from sales of the ‘Hometown’ song have gone to a relief fund to help rebuild the Joplin community. It’s also good to hear that Kenny’s on the radar of country music champion Bob Harris, so it’s unlikely to be too long before we hear more from this guy.