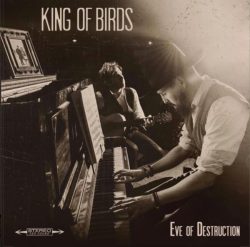 When the chorus kicks in on ‘Down On the Corner’ – the opening track on ‘Eve of Destruction,’ the debut album from sibling songwriters Charlie and Stirling Gorman, known collectively as King of Birds – the adrenaline follows. It’s a shock to the system in the best way. King of Birds, although hailing from the village of Elderslie, 14 miles west of Glasgow in Scotland, recall the best of the heartland rock of America. Its songs encapsulate long, scenic drives along the fruited plains, conjuring the 1980s heyday of the Bruce Springsteens, the John Cougars, and, especially vocally, the BoDeans.

‘I Hope We Don’t Fall In Love’ is that perfect mid-tempo pop song that used to blast from Top 40 radios about 35 years ago while cruising with your date around town. That’s no slight on the song’s relevance to today at all – it’s more of an indictment of how bland current radio fodder has become. Both ‘When We Were Kings’ and ‘Hard Times for a Good Man’ underscore the working-class Springsteenian vibes so prevalent on ‘Eve of Destruction.’ ‘Peace of Mind’ evokes Dylan melodically while the music is straight-up two-step country, complete with dancing pedal steel.

Some trimming could help the second half of the album, but the closing ‘Harvest Time’ ends on an exquisite moody jam that promises even better things to come on the next King of Birds release. ‘Eve of Destruction’ is an exciting start.

Folk-rock Scottish siblings serve up sounds of the American heartland