The GRAMMY-winning Kronos Quartet has announced its new album ‘Long Time Passing: Kronos Quartet and Friends Celebrate Pete Seeger’, a tribute to the music, political philosophy, and social impact of Seeger, which is due out 9th October on Smithsonian Folkways Recordings. Joining the  group are Sam Amidon who appears on Kronos’ 2017 album ‘Folk Songs’ (which came out on the Nonesuch label), Maria Arnal, Brian Carpenter, Lee Knight, Meklit, and Aoife O’Donovan. The artists give voice to the plainspoken songs of struggle that Seeger both wrote and collected in his seventy-plus years as a musician, while Jacob Garchik and Kronos’ arrangements translate his banjo-playing for the group’s two violins, viola, and cello.

While a boundary-pushing string quartet might not be the first artists you associate with a legendary folk singer, San Francisco’s Kronos Quartet (David Harrington, violin; John Sherba, violin; Hank Dutt, viola; Sunny Yang, cello) was birthed in protest. Harrington was inspired to form the group in 1973 after hearing George Crumb’s ‘Black Angels’, which was inspired by the horrors of the war in Vietnam. Across Kronos’ more than 60 albums are examples of a worldview that shares commonality with Seeger – whether it’s the group speaking truth to power (like 1996’s ‘Howl, U.S.A.’) or sharing its platform with a global community of artists (including Homayun Sakhi and Alim and Fargana Qasimov on Folkways’ 2010 release ‘Rainbow: Music of Central Asia Vol. 8’). Long before the group became a go-to collaborator for artists like Terry Riley, Wu Man, Aleksandra Vrebalov, Asha Bhosle, and Trio Da Kali, and had over 1,000 works written for it, Kronos was making itself known with Ken Benshoof’s ‘Traveling Music,’ its very first commission, which interpolates the refrain from Seeger’s ‘Kisses Sweeter Than Wine’ (performed here with O’Donovan on vocals). “Pete Seeger has been part of my life for as long as I can remember,” Harrington says, citing the live album ‘We Shall Overcome’ as a seminal recording. 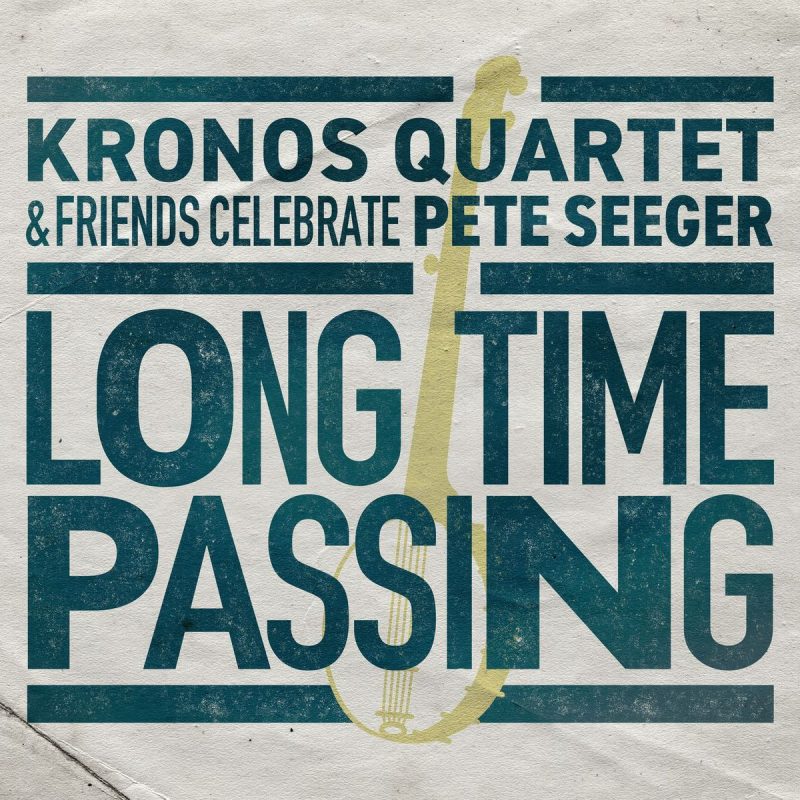 As for Seeger, he was raised in a classical-music household, with an ethnomusicologist father and concert violinist mother. His father later married the modernist composer Ruth Crawford, who introduced the young Pete to the avant-gardists in her circle. That he approached vernacular music from the outside, as a kind of political commitment, made Seeger’s medium — and his choice of instrument, the banjo, which originates in West Africa — that much more striking. It also gave him a crucial perspective that allowed him to understand the ways that different communities communicate amongst themselves via music. As Brendan Greaves explains in the album’s liner notes, it was Seeger’s conviction that “we are all the ‘folk,’ that folk music is not the quaint province of the other — the rural, the poor, the disenfranchised, those of different races, faiths, languages, etc. — but we are all of us, in fact, the folk.”

‘Long Time Passing’ takes Seeger’s paradoxically cosmopolitan vision of folk seriously. Within the span of the album’s first three songs, the quartet moves from the burly union anthem ‘Which Side Are You On’ to Zoe Mulford’s gorgeous ‘The President Sang Amazing Grace’ to Kronos’ arrangement of Hindu devotional ‘Raghupati Raghav Raja Ram,’ giving us a sense of the universality of struggle in about ten minutes. Elsewhere, Spanish singer Maria Arnal lends her voice to a pair of songs recorded live in Barcelona, including the antifascist lullaby ‘Jarama Valley,’ which she sings partially in Catalan. (That the song, which is thought to have been composed by British soldiers fighting in the Spanish Civil War, took its melody from the American cowboy song ‘Red River Valley’ only proves Seeger’s point further.)

Throughout, the arrangements are as spry and supportive as Seeger’s playing, with Dutt and Yang frequently replicating the clawhammer thump of his rhythms while Harrington and Sherba bow away at the lead. In the excoriating ‘Garbage,’ all four musicians make their instruments squawk like stressed crows circling the eponymous heap, while the album’s centerpiece, Garchik’s original composition ‘Storyteller,’ is a sixteen-minute suite that moves briskly from downhome playfulness to lament and back again, falling in and out of sync with archival recordings of Seeger singing, speaking, and playing his banjo with a thematic sensitivity that recalls the 1975 version of Gavin Bryars’ ‘The Sinking of the Titanic’ and Steve Reich’s ‘Different Trains’ (the 1989 recording of which by Kronos Quartet led to a Grammy win for Reich).

The scope of ‘Long Time Passing’ — and the sadly persistent relevance of the songs themselves — makes it easy for anyone to find themselves in Seeger’s work. In discussing ‘Step by Step’’s declaration that “drops of water turn a mill / singly none, singly none,” Greaves writes, “Seeger was talking about grassroots activism, of course, the power of communities organizing in solidarity. But he was also talking about our actual human voices, joined in song, nourished and strengthened by that joining.”

The music for the album was commissioned by the FreshGrass Foundation. Kronos premiered the songs in a series of concerts in San Francisco, Barcelona, and other locations, culminating in the world premiere of the full program at the FreshGrass Festival at MASSMoCA in North Adams, Massachusetts, in September 2019.

About Mark Whitfield 1519 Articles
Mark Whitfield has been Editor of Americana UK for the last 20 years while also working in public health as his day job, which has been kind of busy recently.