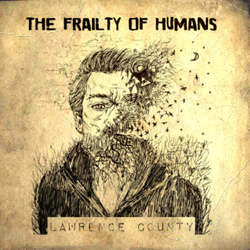 The title of Nottingham alt-country outlaws Lawrence County’s new album, ‘The Frailty of Humans’, couldn’t be more apt for these worrying times we’re living in – and, as if that’s not prescient enough, there’s even a song on it called ‘This Is The End Of It All.’ You could be forgiven for thinking there’s witchcraft at work, which, funnily enough, wouldn’t be too far from the truth, as this record is steeped in folklore and full of tales of fire and brimstone, death, the demon drink, preacher men and troubled souls. Pour yourself a stiff one before you settle in for a listening session.

Previously known as DH Lawrence & The Vaudeville Skiffle Show – the idea for the band came from a conversation songwriters Al Rate and Bill Kerry III had when they were sat in a local pub, deep in the Bagthorpe Delta, under a portrait of DH Lawrence, and swore they could see his eyes moving –Lawrence County are inspired by the sounds and storytelling of Townes Van Zandt, Bob Dylan, Leonard Cohen and Billy Bragg, as well as traditional English folk music. They also cite The Felice Brothers’ 2007 album, ‘Tonight at the Arizona’, as a major influence.

First song, ‘They’re All There’, sets the scene perfectly – in fact, it takes us back to that local pub where it all began. Over the strains of double bass, haunting fiddle and menacing, twangy guitar, we’re introduced to a cast of strange and colourful characters who are drinking in the bar: “The guy with the vintage geetar, he came in a green sports car, and the fellow with the femme fatale, he just got out of hospital… they’re all there – in the bar, in the local bar.”

‘By The Briar’ is a moving, forlorn and funereal country song, with mournful cello – “My love, she swings by the briar, the sway of my body lifts her higher and higher…” – while ‘Liquor in the Corn’ is a Nick Cave-like, Southern Gothic story of a doom-mongering preacher who is struck by lightning when a storm descends. A sinister clergyman also crops up on the brooding ‘This Is How We Do It In The Country’, which is soaked in whiskey and blood.

Lawrence County nod to their folk roots with ‘Black Sally’, an authentic sounding, tragic tale of a lonely lass – “There was a girl, her name was Black Sally, she died alone – she’d never marry”, and a rousing version of the traditional murder ballad, ‘Lucy Wan.’

Contemporary culture also gets a look in on ‘Bye Bye Americae’, which is a wry commentary on the Trump administration – “Oh the President is lying and Disneyland is dying. The apocalypse is coming and the President is humming. Long live the United States” – accompanied by hillbilly banjo and mariachi trumpet.

‘The Frailty of Humans’ is, at times, dark and disturbing, but is shot through with black humour. A richly rewarding album, it’s full of great story songs – some of which sound like they’ve been sung and played in the backrooms of remote pubs for many years. That’s how they do it in the country.