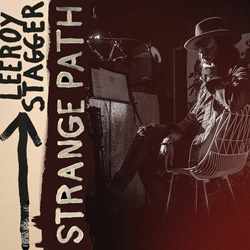 ‘Strange Path’, the new record from Canadian, alt-country singer-songwriter Leeroy Stagger, certainly lives up to its title – it’s an album that frequently veers off into unfamiliar territory – electro-glam-rock, anyone? – but, sadly, it also ends up in the middle of the road far too often.

The end result of ‘a triple album’s worth of scrapped demos, record label rejections and a spirit-reviving retreat inwards’, it’s said to be Stagger’s most ambitious release yet. It’s certainly slick and shiny and built to impress, but it’s also overproduced – Stagger shares the duties with Brad Barr of Montreal-based indie-folkers The Barr Brothers on four of the eleven songs. There’s a contemporary, mainstream sheen to many of these tracks, but they lack heart and soul and come across as contrived – it’s the sound of someone trying far too hard and throwing everything at a wall and hoping some of it sticks.

First single ‘Strange Attractor’ is an infectious, but throwaway, synth-heavy, glam-rock stomp, and ‘Jesus + Buddha’ is anthemic, radio-friendly AOR – built on a driving bass groove and squalling guitar. Unfortunately, ‘Breaking News’  is, wait for it, commercial, funk-tinged pop (!) and, worryingly, has shades of Maroon 5… It also features the truly awful lyric: ‘All around the world, the kids are rocking to the beat, getting hip to revolution, marching in the street’. When the revolution comes, this song will be first against the wall…

‘Strange Path’ fares better when Stagger doesn’t try to overstretch himself. ‘Nobody Alive (Gets Out Of Here)’ – a ballad about dreaming of escaping from a dead-end small town – has a pretty, spiralling melody, but, like several of the songs on here (‘Mother’, ‘Deeper Well’, ‘These Things’, and ‘The Light’), it’s Springsteen-lite and clichéd –Stagger sings about “cheap cigarettes” and “another case of beer.”)

The album has been mixed by five-time Grammy winner Ryan Freeland (Ray Lamontagne, Bonnie Raitt, Aimee Mann, Rodney Crowell) and Stagger has assembled an impressive cast of guest musicians, including drummer Pete Thomas (Elvis Costello and The Attractions) and guitarist Paul Rigby (Neko Case, Garth Hudson and Jakob Dylan), but it feels like it’s all style and no substance.

‘Strange Path’ is a companion piece to ‘Me and the Mountain’ – a more traditional country and Americana-influenced album – and a far superior one – by Stagger, which came out in May this year. Sometimes it’s better to stick to a path that you know…

Commercial, overproduced, Springsteen-lite, MOR rock and pop with an unwelcome diversion into electro-glam