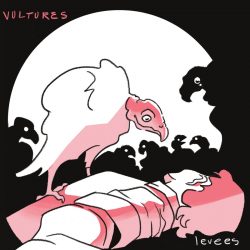 ‘Vultures’ is the second album from Justin Mills, hailing from Dallas Texas, performing as Levees. The album features a stripped back sound on guitar and banjo, with sparse arrangements reminiscent of Willie Watson’s recent solo albums. Flagged as a concept/narrative album, it is the story of two runaways, with high hopes fading as their road trip crosses the western USA.

Stand out songs include the banjo-led songs ‘Dawn at Joshua Tree’ and ‘Flagstaff’, with optimistic lyrics (“We sing for the winter, we sing for the spring, we cry for the glory that our future will bring”) giving way to the realization of bitter truths (“You spit searing shrapnel like a bursting grenade, and there’s nothing of my heart left to save”).

The songs are either banjo or guitar-led in equal part, with just an occasional fiddle or keys part added to the mix. The former would at times benefit from extra instrumentation, to allow the moodiness of the songs to be further enhanced. Mills’s vocals become more raw and emotional as the story progresses, the anger of the lyrics and their delivery sometimes reminiscent of early era Loudon Wainwright III.

A strong introduction. His next offering will be eagerly awaited.