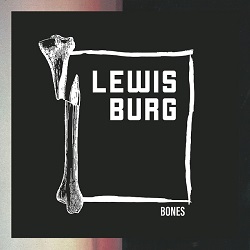 Born out of singer-songwriter Ali Robertson’s solo work, North London’s Lewisburg have fleshed out to a four piece band this year, and are now following up a couple of single releases with their first EP. With music that can sound like the soundtrack to a moody western or downbeat crime movie, Ali Robertson’s words dwell on the darker shades of life. ‘Bottom of the Hill‘ is a drifter’s justification, and an acceptance of the unchangeable within, as things keep going further downhill “I would like to know my fate” rasps Robertson, adding, hopefully, “and I’d be forgiven for my family’s sake“. All the while Julien Baraness add bleakly unadorned guitar breaks.

Lewisburg can clearly throw up some intriguing songs – ‘My Dwelling Place‘ opens up with a heartbeat pulse of bass, which fits with a gothic-Americana feel as the song expands, but the route through the song is obscure. Someone is being watched over “there are many ways that I’m high above you / there are many ways that I try to guide you“, but is this a true spectre speaking from beyond the grave, a stalker lurking in the shadows, or a more benign but anonymous presence powerless to act ? Hard to say, which gives this song – and the similarly abstract narrative of ‘Roll On‘ – re-listen value. ‘Bones‘ is, like the earlier singles, a promising release – we should be hearing more from Lewisburg.