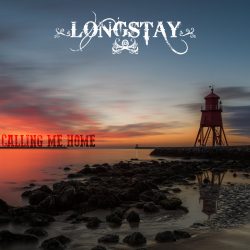 Longstay are a confident country-rock act from Perth with a growing reputation in the Scottish Americana scene. After several years of gigging, Longstay already have plenty of experience and chemistry to draw upon and there is a sureness in their musical performances. Longstay’s accomplished debut album, ‘Calling Me Home’, is a convincing introduction.

Flourishes of piano and organ on many of the songs, such as ‘My Turn’ and ‘Forever,’ are a nod to decades past, placing this new record securely in the company of the acts that have inspired the band. There are various southern rock and country influences in evidence, from Creedence Clearwater Revival through to Chris Stapleton, but the songs benefit from a hint of Scotland, creating a fresh sound.

The album opens with the up-tempo ‘Mariah,’ a buoyant, poppy country-rock song that is strong on melody and high on energy. Although the songs that follow range in style, tone and pace, ‘Mariah’ introduces the listener to the tuneful, striking vocals that are the key to the whole album. Callum Smith, Longstay’s songwriter, and Malcolm Swan sing together beautifully, harmonising effortlessly and finding just the right amount of tuneful depth and grit. Some of the best moments on ‘Calling Me Home’ are when the instrumentation slows or pauses and the rich harmonies are left alone to sway and swell.

Several songs, such as ‘My Turn’ and the album closer, ‘Leaving,’ are rocky, rhythmic and lively. However, Longstay seem more poised and distinctive when they slow down and strip things back a little. Good examples are the story-based ‘Summerton’, with its fluid electric guitar, and the gentler-paced ‘Things I Can’t Find,’ which layers acoustic guitar over a over a strong beat as the song builds. But the album’s highlight is the sombre ‘Remember’ about a son writing of his father passing on. It’s a longer, more reflective, mature piece that perhaps points towards the band’s future direction. The song demonstrates Longstay’s aptitude for melodic vocals and clever lyrics: “The next time you see me, I won’t see you back,” and it is the track that remains with the listener after the album is over.

An Americana band that covers current country royalty, Chris Stapleton, on their debut, is not short of confidence. And they do it well, too. Longstay’s version of ‘Fire Away’ slowly builds until the fiddle kicks in and makes it their own. Indeed, there are two further covers on the album and all three stand up well against the source material. John Fogerty’s ‘Lodi’ is a fine choice, given the obvious influence of Creedence Clearwater Revival across the album. However, it is ‘A Ring of Fire’, by fellow Perth band Southpaw, that provides one of the album’s real high points. The song is given an urgent, driving rhythm and perfectly balanced deep, gravelly vocals; guitars, keys and fiddle all have their moments in this richly, rounded version. The band are musically self-assured enough to take possession of all three covers, transforming them, unmistakably, into ‘Longstay’ songs.

The most remarkable aspect of this debut is that the average age of the band members is just 17. For them to have produced assured songs with such maturity and identity while still so young is a real achievement and promises an impressive future if they grow and build from here. Longstay could well be the stalwarts of the Scottish Americana scene in years to come…and it started here with this impressive debut.