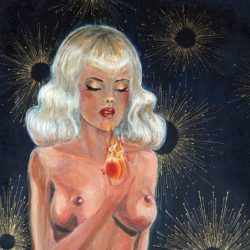 Love Trap from Turin, Italy are a super-duo of sorts formed by Stefano Isaia and Marco Spigariol from the remnants of a number of different groups (Movie Star Junkies, Lame and Krano to name a few) and ‘Rosie‘ is their debut release under the Love Trap moniker. Combining elements of country and Americana musicianship in the traditional band sense alongside subtle pop sensibilities within the vocal melodies and harmonies the group have crafted a unique sound which blends the two together seamlessly.

The use of instrumentation within the songs on ‘Rosie‘ is a large contributing factor to the groups sound as they often use the traditional instruments (guitar, bass and drums) to create a solid backbone to drive the songs juxtaposed with slightly jarring piano lines to give the songs texture, this formula and a variation of it is used throughout and most evident on album single ‘Another Day, Another Sin‘ and second track ‘Huckleberry Finn‘. This isn’t to say the piano parts don’t work within the songs as they are a constituent part of the songs identity and the band’s sound and stylistically, fit really well.

The album as a body of work stems from a jam session which evolved into the 8 track album it is today and is described by the duo as a ‘stream of consciousness’ whereby the musicians were able to create the music they wanted to with no preconceptions of what it should sound like and it is rare that such a coherent collection with the stamp of originality that ‘Rosie’ has should be born from such conditions however, this is a testament to the creativity of the group but also serves as a ‘lightning in the bottle’ moment where they have captured that original magic and experimental stages of the creation process which does nothing but add to the charm of the record.

Throughout the record there are a number of stand-out tracks ranging from the experimental ‘There She Blows’ which utilises a blues guitar riff whilst dialling back the piano, the laid back title track ‘Rosie’ where the erratic piano from the openers is swapped for an edgy guitar pattern to the melancholy ‘When You Were 21’ with vocal effects and a falsetto harmony generate an ethereal quality to the song alongside minimalist and spacious instrumentation an although a change of pace to the rest of the album, it fits perfectly to break up the pace and showcases the band at their most experimental and keeps the album interesting with its flow.

For a duo without any intention of recording a record and getting together to see what they could come up, ‘Rosie’ comes across as an accomplished, thoughtful debut and it is refreshing to hear an album which pushes to experiment with basic instruments and their sounds to put their own unique spin on the genre.

An exciting, creative and seemingly accidental debut from a promising duo